History and Use of the Japanese Tsurugi Sword 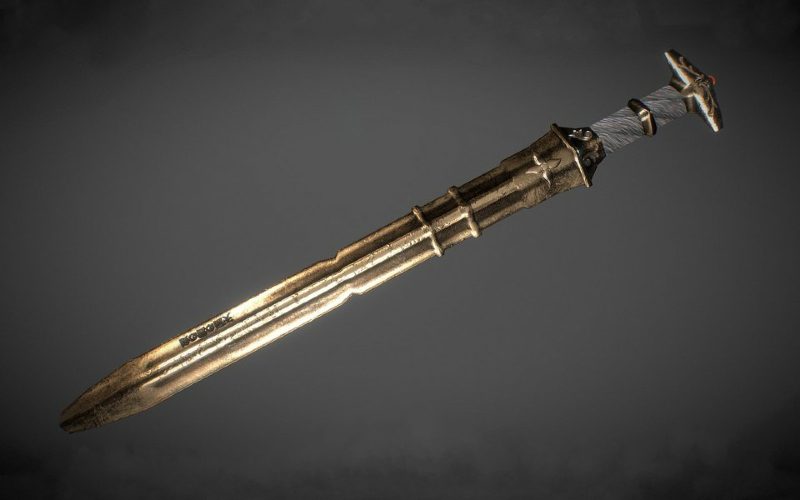 Throughout Japan’s history, the was not only a weapon but also considered a work of art and a religious symbol. The tsurugi, sometimes called a ken, is a straight double-edged and one of the oldest types used in ancient Japan. Ancient warriors used the in battles and worshiped them as gods.

Let’s explore the history and use of the tsurugi , and why it remains relevant in modern times.

Characteristics of the Tsurugi

Unlike the curved samurai swords, the tsurugi was of ancient Chinese design used in Japan during the 3rd to the 6th centuries.

Here are the unique characteristics of the tsurugi :

The material changed according to age, as ancient tsurugi was originally made of stone, and later of bronze, and then iron. A unique feature of a tsurugi was that the handle and blade were often forged as one piece, unfolded, and uniformly hardened.

By the late Kofun period, the Japanese method of hardening swords emerged. Swordsmiths began tempering the blades, where they hardened the cutting edge more than the steel towards the back or mune, which prevented them from becoming too brittle and breaking during use.

Tsurugi swords from the middle Edo period often featured the hamon or temperline pattern, usually a suguha or straight pattern and straight grain pattern or masame hada. Some also had fullers or blood grooves running about half their length.

Characterized by its blade form rather than its length, the tsurugi or ken can range from about 30 to 60 centimeters long. On the other hand, the famous Kusanagi no tsurugi, one of the imperial regalia of Japan, is claimed to be about 84 centimeters long. However, the government forbids the public to see the , so its appearance remains unknown.

The hilt decoration of a tsurugi varies, but the ones used in religious ceremonies often feature a triple-pronged vajra hilt. The vajra is tied directly with Tantric Buddhism in Asia, and it originated in India as the lightning bolt weapon of the god Indra. Some historical tsurugi swords or daggers were mounted in shirasaya, a plain wooden scabbard, while others had decorative lacquered scabbards.

Tsurugi vs. Katana vs. Chinese Jian

The tsurugi is a straight, double-edged of Chinese design, similar to the Chinese jian and primarily used for thrusting. On the other hand, the katana is a slightly curved and single-edged and a slashing weapon. The Mononofu were ancient warriors in Japan who wielded the tsurugi, while the samurai relied on their katana.

Like the ancient tsurugi, early Chinese jian swords were bronze-made. Early swordsmiths uniformly hardened the tsurugi blades, but later, they tempered them like the katana , resulting in the aesthetic feature called hamon or temperline pattern.

Facts About the Japanese Tsuguri

The name tsurugi was the ancient term for the sword, usually referring to the straight, double-edged blade of ancient Japan. It also comes from the verb tsurihaki, meaning to wear a suspended from the belt.

The history of the tsurugi extends into legend, so here are the things you need to know about the weapon:

The tsurugi appears in early Japanese historical and religious texts.

The Nihon shoki or Chronicles of Japan narrates several Shinto myths and legends of ancient Japan, including the religious significance of the tsurugi . The Kojiki or Records of Ancient Matters also chronicles the descent of Japan’s emperors from gods, especially the Yamato family that unified the country in the 4th century. The Yamato rulers associated their clans with Shinto creation myths to justify their rule.

The Kusanagi no tsurugi is one of the most famous swords in Japanese mythology.

In an account, its original name was Ama no Murakumo no Tsurugi, meaning the Sword of the Gathering Clouds of Heaven. In Japanese mythology, it was originally the of Susanoo, the god of sea and storms. Its name was later changed to Kusanagi, meaning cutter of grass. The Kusanagi no tsurugi was the most powerful the world had ever seen, as the warrior who wields the can single handedly conquer an entire army.

The Kusanagi no tsurugi became an imperial regalia of Japan.

Never shown in public, the Kusanagi no tsurugi is one of the Three Imperial Regalia of Japan—also called the Sanshu no Jingi or three sacred treasures. The tsurugi, along with the mirror Yata no Kagami and curved jewel Yasakani no Magatama, symbolize the emperors’ divine heritage and power. According to tradition, Amaterasu, the Shinto goddess of the sun, gave them to her grandson Ninigi-no-Mikoto, whose descendants became the emperors of Japan.

These treasures were handed down through generations to remind the rulers of their divinity and to encourage virtuous rule. During the Gempei War, the tsurugi was lost but then replaced. Today, the three imperial regalia remain part of the enthronement ceremony for Japanese emperors. The and jewels were brought to the imperial throne and set beside the emperor, while the mirror became a sacred object to move.

The Mononofu warriors wielded the tsurugi and believed it had divine power.

Ancient warriors of Japan were called Mononofu, usually referring to soldiers of the 500 to 800 era. In battles, all swords used to kill and behead an enemy were thought to possess divine power. The Mononofu worshiped the tsurugi as a divine and uttered magic words while holding it in their right hand and a shield in their left.

Some Japanese weapons had the tsurugi-style blade with two cutting edges.

During the Muromachi period, many tanto daggers had two cutting edges, but differed from the tsurugi because the ridge was not centrally placed, and there was sometimes a slight curve. Later, the Bizen school of Sukesada, Munemitsu, and Katsumitsu produced two-edged tanto. A tsurugi-style blade can also be made as a Japanese yari or spear, with a long tang and a ridge along its center on both sides.

Apart from the fullers or blood grooves, Japanese blades usually featured decorative carvings or horimono. The tsurugi or ken motif was not uncommon, along with dragons, Buddhist motifs, deities, bonji or Sanskrit characters, and kanji characters. Many tachi swords from the Nanbokucho period and wakizashi and tanto daggers of later periods had ken-style horimono designs.

The Shinto attributes spirits or kami to the tsurugi .

Japan’s native religion is Shinto, characterized by the spiritual belief in animism where all things possess gods or spirits called kami. Shinto mythology incorporates the as a symbol. In modern Shinto rituals, priests make a harai movement based on the cutting motions of the tsurugi .

The harai movement is derived from techniques, as swordsmanship and religion are interconnected. They believe that swords can create union by imposing social order and reconciling the swordsman with his duty.

The tsurugi also has religious significance in esoteric Buddhism.

In Shingon Buddhism, a straight, double-edged , usually with a vajra hilt, is often depicted in the hand of Fudō Myō-ō, a Hindu deity who later became part of the Japanese Buddhist pantheon. In the samurai era, he was considered the patron saint of swordsmen and protector of warriors. Shingon Buddhism promotes belief in talismanic properties, so incorporating the vajra to the hilt makes a tsurugi an embodiment of the talisman.

Mt. Tsurugi got its name from the ancient .

On Shikoku island, Mt. Tsurugi is the second highest mountain, located in the heart of Tokushima prefecture in Japan. It is also significant to Shugendo, a Japanese religion that merges folk beliefs with indigenous Shinto and Buddhism.

The religion flourished during the Heian period and placed importance on pilgrimages to sacred mountains. Its practitioners are referred to as yamabushi, meaning one who bows down in the mountains. However, it remains unclear why the mountain was named after the .

The Tsurugi in Japanese Mythology

Sword-wielding deities are not uncommon in Japanese myths, and one of them is Susanoo, the god of sea and storms. After slaying a gigantic serpent, Susanoo discovered a within the creature’s tail, and he named it Ama no Murakumo no Tsurugi. He gave it to his consort and sister Amaterasu, who later gave it to her grandson Ninigi-no-Mikoto when she sent him to rule the earth.

After many generations, the great warrior Yamato Takeru, the son of the legendary Japanese emperor Keiko, inherited the tsurugi . In some versions of the story, the emperor gave it to his son when he sent him to fight in the eastern parts of Japan. In another version, his aunt gave him the .

When Yamato Takeru was nearly killed in an open field that his enemies set on fire, he used the tsurugi to cut down the grass. In doing so, he discovered that he could control the speed and direction of the wind. So, he used this ability to turn the fire back against his enemies. To mark his victory, he renamed the Kusanagi no Tsurugi, meaning Grass Cutting .

History of the Tsurugi

The swords of ancient Japan were more than weapons of war, as they held mystical and religious significance. The tsurugi was one of these swords that sparked a cultural interest that continues today.

Even if the Yayoi people used iron tools for farming, Yayoi-period swords remained bronze-made. It remains unknown to what extent they utilize the swords as a weapon or a tool, but it seems like they used them for religious ceremonies.

After all, the Yayoi civilization used bronze ceremonial objects as spiritual symbols. In most accounts, Yayoi culture used mainly spears, bows-and-arrows, and shields as weapons instead of bronze swords.

The term kofun refers to the burial mounds created by the people of the period. Kofun-period swords were straight, short, and functioned as a rough tool of warfare. One of the blade types that emerged from this period was the double-edged tsurugi. The straight swords of the early Kofun period would have been ideal for infantry use, primarily for thrusting and hacking.

As clans began to compete for power, they sent their troops to battle. The drawing of straight swords required two movements. First, the warrior would draw the from the scabbard. He would raise it overhead so he could make a cutting attack. However, the straight blades would have prevented the clean slashing motions made possible by the curved swords of later periods.

During the Heian period, the Japanese blades transitioned away from the straight and bulky tsurugi designs. In the mid-Heian period, many swordsmiths began experimenting with curved and differentially-tempered blades, which later defined the Japanese sword. The curved single-edged blade made the Japanese a slashing weapon, and the curved tachi became the standard weapon of Heian warriors.

Most recognized for its straight double-edged blade, the tsurugi or ken was one of the oldest forms of swords used in Japan mainly for stabbing and hacking. While the mononofu warriors used the as a weapon, the shamans used it in religious rituals. Today, it remains relevant due to its religious and mythological significance, mainly in Shintoism and Buddhism. 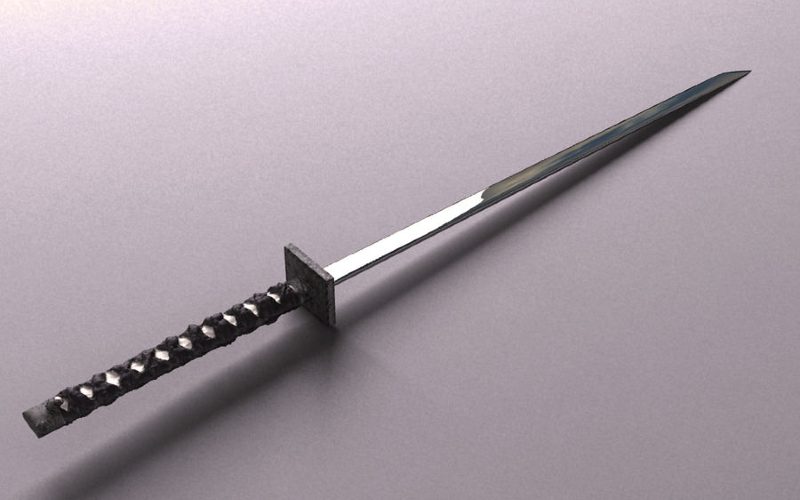 Best Chokuto Swords and Their Use in The History

The chokuto were prehistoric swords with straight single-edged blades, predating the typical Japanese sword with curved blades. Despite its crudely 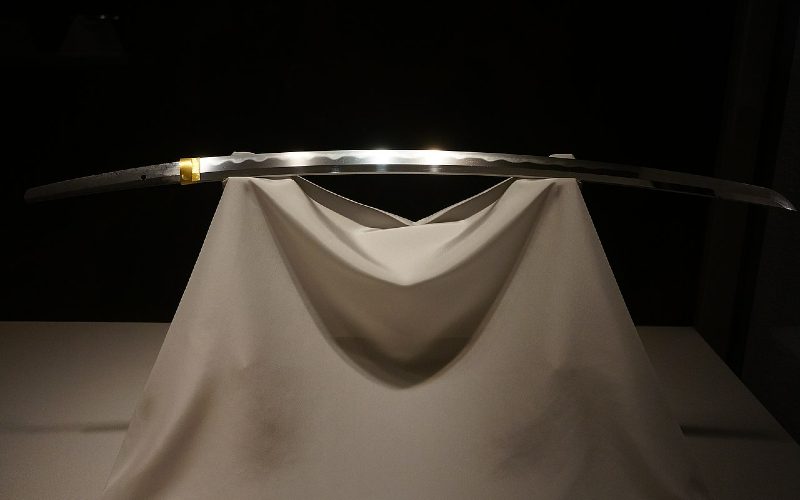 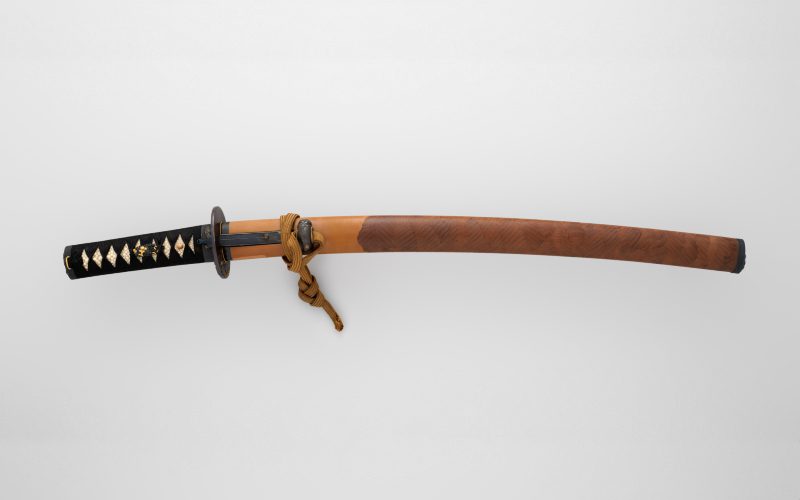 In feudal Japan, the short sword wakizashi served as an efficient secondary weapon of the samurai, who traditionally carried it 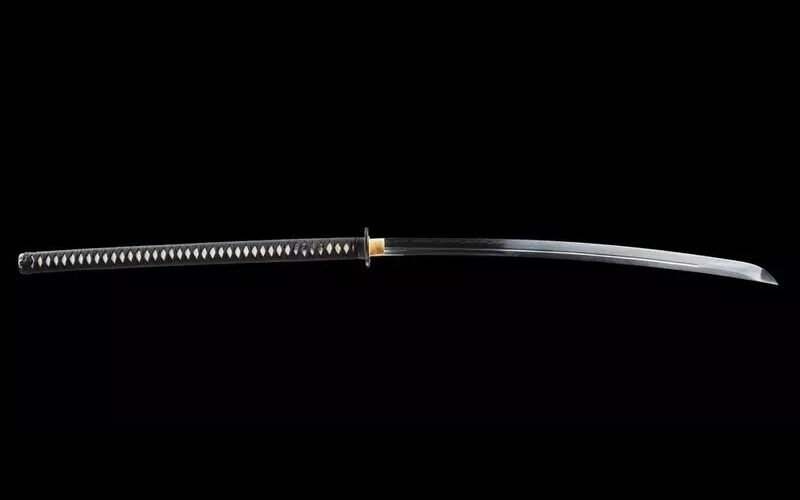