Sword Hilt: Its Variety and Evolution 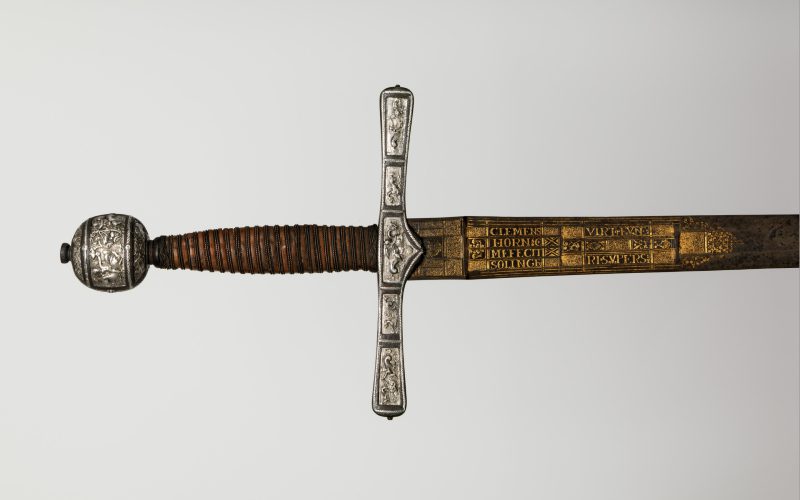 A hilt comes in a wide variety of forms depending on the period and origin. The portion of a below the blade known as the hilt consists of a hand guard, handle or grip, and pommel. Most medieval swords had a crossguard, but later swords became more elaborate, with the additional features of side rings, finger rings, knuckle guards, or swept-hilt guards.

Let’s explore the history of the hilt, its evolution, and how it differs on different types of swords.

Often a rounded knob at the end of the hilt, the pommel serves as a counterbalance to the blade and could also be used as an improvised striking weapon. A triangular-shaped pommel is typical of the Viking swords, but medieval swords usually had a spherical, wheel, or brazil-nut pommel. During the Late Middle Ages, pommels had a variety of forms and shapes.

Some swords like shamshir and kilij feature an L-shaped pommel, sometimes with a cord loop. Classic examples of the Persian shamshir can also be found in Turkey, India, and other parts of the Islamic world.

The Indian talwar often had a dish-shaped pommel and an overall hilt with fine traditional Indo-Muslim decoration. Most flat pommels also featured an ornament at the top. It was popular during the early 19th century when the British East India Company extended its control over most of India, and British officers noted the superior quality of the .

Some pommels were in the shape of animal heads like a lion, eagle, and other creatures. They were common in hanger swords and ceremonial swords. Often richly decorated, the smallswords were an integral part of a gentleman’s wardrobe, so pommel designs reflected their style and wealth.

Early swords had wooden grips, but some featured leather grips wrapped in twisted brass wire. Indian swords usually had ivory grips, sometimes carved and of outstanding craftsmanship. By the 17th century, Italian dress swords often featured steel handles, usually pierced or chased. handles also varied in length, depending on the type of and its use.

The arming swords of medieval knights had a one-handed grip, leading many to erroneously call it a short to set it apart from a longsword that allowed two-handed use. However, its blade was not exactly short and sometimes even had the same length as the other swords.

Some swords are more than one-handed but somewhat less than two-handed. Fencing masters often refer to them as bastard swords. Generally, the grip allows a wielder to use it with one hand with the addition of two or three fingers from the other hand, hence the name hand-and-a-half .

The distinguishing feature of a longsword is its long grip that allowed the use of two hands, though it was lightweight enough to wield with one hand. Since it was a sidearm for armored fighting, it was short enough to be worn on the belt.

Sometimes called great swords, two-handed swords like the German zweihander required the use of two hands. Unlike longswords, they were not lightweight enough to use with one hand. Their extremely long grips allowed the wielder to use the weapon with both hands with space in between.

The Ottoman saber, like the Persian kilij, usually features a distinctive pistol-style grip. The Mamluk warriors who descended from non-Arab slaves also wielded a similar sabre which inspired the Mameluke of the US Marine Corps.

The guard protected the swordsman from the enemy’s . The crossguard is the simplest form of the guard known since antiquity. Throughout the 14th century, various modifications were applied to the quillons and the arms of the crossguard, causing them to be varied from region to region.

Some swords had quillons that curved toward the blade and others toward the handle, though the latter was impractical for a guard that protects the hand. Eventually, hilts evolved, consisting of side rings, finger rings, knuckle bow, and other features.

Some swords of the 16th century featured crossguards extended forward and backward forming the forward and rear quillons. The S-shaped quillons were common to hunting or hanger swords, named because of the way they were hung from the belt. By the 18th century, these swords became part of the standard military weapon in several armies.

Also called ring guards, the side rings provided extra protection to the hand. They are at the center of the crossguard on both sides. The Scottish Lowland swords, rapiers, two-handed swords, and some executioner’s swords often featured ring guards.

Sometimes referred to as the arms of the hilt, finger guards allowed the wielder to grip the ricasso—the unsharpened part of the blade—while protecting his fingers. They were a common feature in thrusting swords like estocs and rapiers. They first appeared in the so-called transitional swords, shifting in hilt design from the classic crossguard to the rapier.

A knuckle guard is a narrow metal strip curving over the length of the handle, protecting the swordsman’s knuckles. Hunting swords, smallswords, and some cavalry sabers often had a knuckle guard. The British cavalrymen used a mix of swords and some of their cut-and-thrust sabers featured a stirrup-hilt knuckle guard.

The basket guard provides more protection on the hand and usually consists of bars, plates, and rings that form a cage around the handle. Early basket guards on broadswords were simple cut-steel guards encircling the whole hilt. The Venetian broadsword schiavona, meaning Slavonic, also features a distinctive basket hilt.

The so-called mortuary features a basket guard resembling the human rib cage. It usually featured portrait medallions, with some had the likeness of portrait heads to the executed King Charles I, hence their modern name. During the English Civil War, the cavalrymen widely used these swords.

In a swept-hilt design, the bars of the guard sweep upward in a curve, from the ricasso to the pommel. Italian rapiers often had the swept-hilt design, usually with side rings, finger rings, knuckle bows, curving quillons, and other features.

Facts About the Hilt

Swords served as fundamental weapons of armies across the world. By the end of the 10th century, swordsmiths laid the foundation of design for the next 1,000 years.

Here are the things you need to know about hilts and their evolution:

A protective sword hilt started to appear in Viking swords.

The hilts on earlier swords did not serve as a protective element until the period of barbarian migrations. Some swords of the Celtic warriors had flared hilts that acted as a guard while the Roman gladius only had a relatively short wooden hand guard. By the Viking Age, swords featured a short crossguard which did not protrude far from the grip. Eventually, crossguards became longer, with some curving toward the blade.

Viking swords have been classified based on their hilts.

Swords of the Viking Age are all relatively similar, but some historians identify them based on their hilt design. In The Norwegian Viking , archeologist Jan Petersen established the typology of Viking weapons including swords. However, different scholars may classify a differently, making the typology a bit subjective.

The Ottoman Empire kilij had a scabbard specially adapted to its blade length and highly curved shape, usually with a slot into its back and covered with sprung still, making it easier to draw. Most of these swords had intricate decorations on the blade and their scabbard also featured similar motifs, sometimes matching the jewel decorations on the hilts.

Swords with lavish hilts usually belonged to a high-status warrior.

Silver hilts with high-quality metalwork were not uncommon as officers’ weapons. In the mid-8th century, some Anglo-Saxon swords featured gold filigrees like interlaced snakes and vine patterns. Viking swords decorated with silver or gold designs usually belonged to a chieftain. In the 18th century, some hunting swords also featured ivory grips, sometimes carved with intricate designs.

Some swords had imported blades and locally made hilts.

Many swords have multiple places of origin. Most Scottish basket-hilted swords had German blades, but mounted with hilts in the lowlands, usually in Stirling and Glasgow. It was also true for the Highland claymore and the Lowland .

Some daggers had hilts similar to swords.

Early fencers used a dagger for parrying with rapier, often matching the chiseled steelwork of the . Some daggers featured curved quillons, side rings, and a pommel. In medieval times, the difference between a short and a long dagger was often obscure. Today, a steel blade of about 30 centimeters or less is considered a dagger. On the other hand, short swords usually have blades between 30 to 60 centimeters.

Some swords can be distinguished by their hilt design.

The Highland claymore is one of the swords with distinctive hilts, recognized for its quatrefoils at the end of quillons. Other swords are distinguished by their grip lengths such as the arming and longsword while others are based on their blade construction, like broadswords and rapiers. Some rapiers have a swept-hilt design, but other swords like estocs also have it.

A Note on Japanese Hilt

Japanese swords have different hilt designs and construction. Its tsuka or hilt features several ornaments like the menuki and kashira. The latter is a decorative pommel cap at the end of the handle, yet not functioning as a counterbalance to the blade.

Japanese tsuba or guard is often disk-shaped and usually features several openings for accessories like a utility knife and a pin-like kogai.

By the 14th century, the design of Japanese swords reached its peak and became a status symbol for the samurai warriors. The grip and guard are separate pieces attached to the blade, so wealthy individuals had several mountings suitable for different occasions.

The hilt refers to a part of a below the blade, including its pommel, grip, and guard. Lavish decorations often suggest that a belonged to an officer, though civilian swords like rapiers also had elaborate swept-style hilts. The design and construction of hilts remain significant in military history and are a testament to the craftsmanship of various cultures. 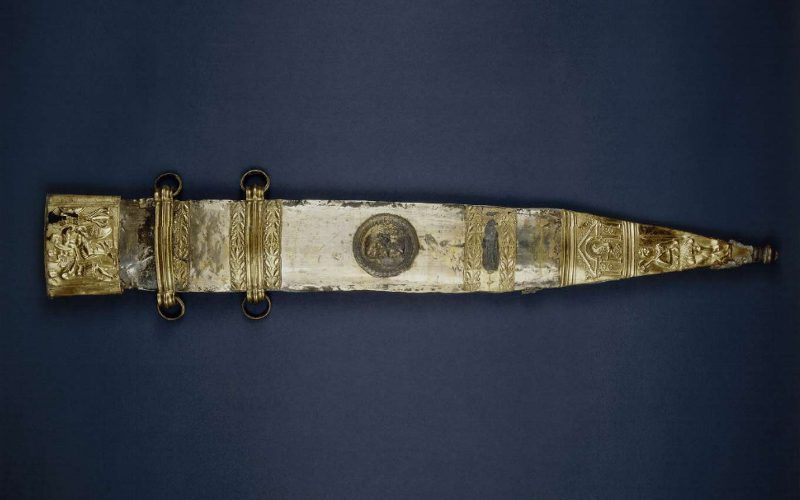 Swords were carried in scabbards that protected them from rain and damp while protecting everything else from their sharp edges. 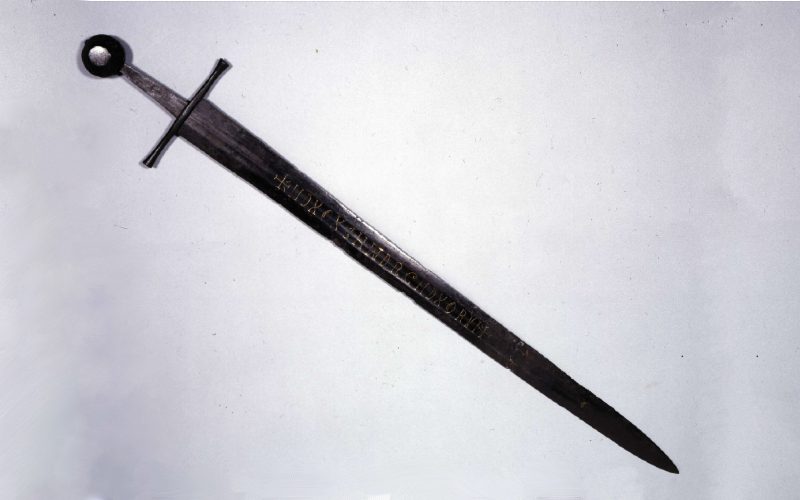 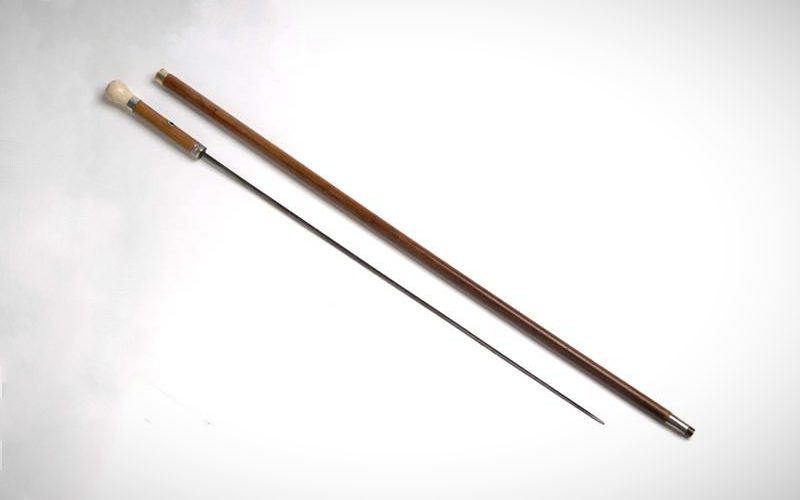