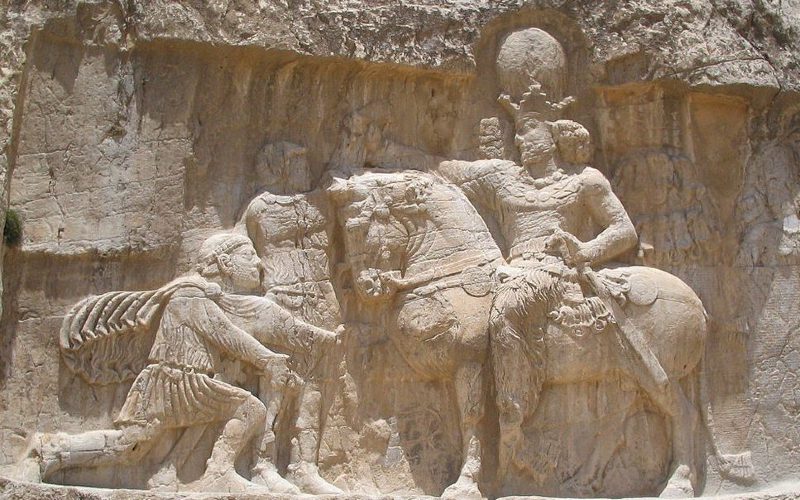 The territory where modern Iran currently resides is one of the most important historical places on Earth and where the famous Persian Empire existed. The Persian Empire traces can trace its origins to long ago and many types of foreign swords passed through these lands, but only some of them can really be called Persian.

In this article, we will take a look at the ancient straight, double-edged Persian swords that were used after the creation of the first Persian Empire (the Achaemenid Empire). We will not discuss all the swords used before that time period that could or could not be Proto-Persians, for example, the Elamites. Then we will talk about the famous curved Persian sword that came to be widely used after the Arabic Muslim expansion.

Persians often used swords and the earliest weapons that were used in the Ancient Persian empire were double-edged straight swords. Archaeologists have found multiple examples of these swords, even as far back as the time of king Cyrus the Great (539-530 BC).

Although a lot of the swords that were used were foreign, like the Hellenic Xiphos and Kopis, there were also some types of Persian swords that were used throughout the entirety of the empire. Common examples of these widely used swords are the ancient Akinake and the much later Sassanian Sword.

The Akinake is a straight double-edged shortsword, sometimes referred to as a dagger, that was widely used in ancient Persia and quickly spread throughout the ancient world. It’s usually around 15 to 20 inches (35 to 50cm) long but sometimes can even go up to 23 inches (60 cm) too.

It was also used for more than just warfare as it was said to be a very prestigious weapon to own – especially for the high nobility. Notable examples include paintings of Darius the Great with the sword upon his lap, his soldiers wielding it, and many more renowned Persian leaders following him.

During the Sassanian era of present-day Iran which spanned 224-651 A.D., kings were almost always shown with a straight sword hanging from their belt. The sword represented victory or that they were victorious in battle. These swords were usually around 39 inches (100 cm) long and were used heavily by mounted units in warfare.

This iron Sassanian sword shown in the picture above with a wooden scabbard covered in gold is a beautiful example of the style of sword that the Sassanians took from Hunnish nomads. These nomads wandered through Europe and Asia in the 6th and 7th centuries, just before the Islamic era began.

It has a long, thin handle with two places to rest your fingers. The scabbard has two P-shaped protrusions where two straps of varying lengths are supposed to be placed on or attached to. The straps hung the sword from the warrior’s belt in a way that made it easy for a mounted user to draw it.

As time went on, these double-edged straight swords will be slowly but surely replaced with the curved sword, as they were in many lands throughout the Middle Ages. There is a slight disagreement among historians today about when the Persian curved sword was introduced to Persia/Iran and when it developed into its own kind of sword.

Either way, the first curved swords that were used in Persia were traced to around the 9th century, but they were officially accepted and spread through the land in the 13th/14th century due to the Seljuk and Mongol invasions.

There were many curved swords that passed through the Middle East like the Turkish Kilij, Indian Talwar, North African Nimcha, Afghanistan Pulwar, and Arabic saber. However, the one that features distinct Persian looks and originates from Persia is called the Shamshir sword.

To most Europeans, this Persian sword is simply referred to as the Scimitar, but its real name is Shamshir and it was the perfect weapon that replaced the straight sword in the hands of the Persian horsemen. The sword was called Shamshir, or “Tiger Claw”, because of the very strong curve of the sword.

The Shamshir sword has an overall length of 35 inches (90 cm). This curved middle eastern sabre was used heavily in almost all of the wars that took place in Persian lands. Its curved and wide blade made it a very powerful tool for slashing in a downward motion.

Shamshirs also have distinct Persian forms like the down-turned animal formed pommel. Also, it doesn’t have a ricasso, which is an unsharpened part of the blade next to the handle, like Indian swords did. The blade curves very strongly at the second half of it and it has two guard quillons that form a very simple crossguard.

The best Shamshirs had blades made of wootz, which is also known as true Damascus steel. This gives the exterior of the blade a very specific grain pattern and distinctive look. In the 16th century, the watered shape of the Persian Shamshir was renowned for its beauty, flexibility, and hardness.

What Swords Did the Persian Immortals Use?

The sword that was commonly used by the Persian Immortals was the straight Akinake. It was later quickly replaced by the Hellenic Kopis sword, which was revealed to us in archeology and ancient art.

The Immortals were ancient units and one of the finest troops used by Persia in many of their wars. Although they are often depicted as savage beasts in modern media, they weren’t anything like that and actually had a very tactical and strategic approach to battles.

They were mostly lightly armored and used spears as their main weapon. But in ancient art and texts, they are also described as using axes, maces, and swords. The swords that they used were double-edged and straight.

Ancient Persians used the double-edged straight short sword in the beginning, but as time passed Persia would heavily rely on the curved blade to arm its soldiers – whether during independent dynasties or under foreign rule. Today, Persian swords are well-received in LARP, movies, and anime. They are also certainly an excellent addition to any collection for sword enthusiasts out there. 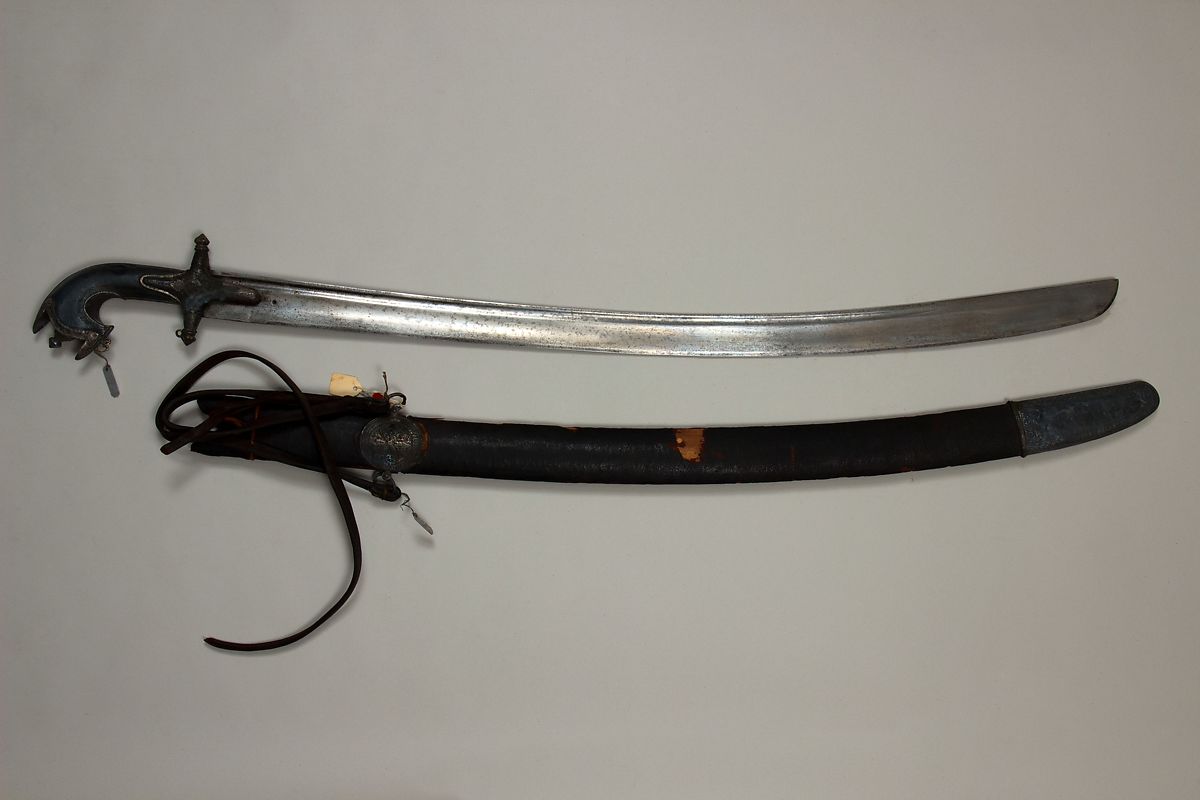 Saif: A Guide to the Arabian Sword 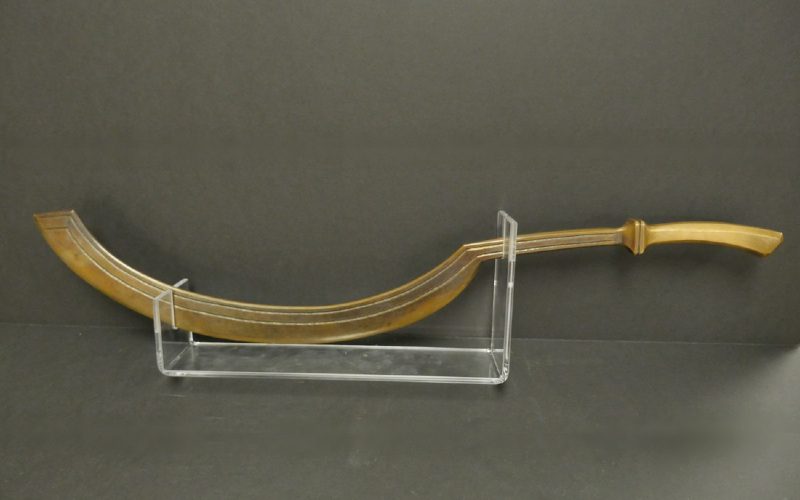