The parrying dagger is a term used to refer to a group of small hand-held weapons from the early Renaissance and European late middle ages. Ubiquitous to the so-called simple left hand dagger, it evolved into the more important main gauche in the early 17th century as it was especially popular in Italy and Spain.

Around the 1600s, the triple dagger and swordbreaker were later designs. Used in combination with another or rapier in the dominant hand, these daggers play a defensive role in an elegant fighting style commonly seen among renaissance gallants. These parrying daggers were often made en suite in terms of decorative technique and construction to the swords that they serve as a companion weapon.

How to Choose a Parrying Dagger

When choosing a parrying dagger, look for a dagger that complements the as a defensive pairing. A good off-hand dagger will need a longer, strong blade, but also a more developed cross-guard. To choose which is best, consider its purpose – is it for a collection, for sparring, or for show?

The parrying dagger is popular among 16th/17th century and renaissance reenactors or pirate cosplayers. If it’s for either of these reasons, the best choice would be a weapon which fits the period, style, or look you are looking for. For these purposes, you may not even need to consider the blade’s durability or material it is made from.

However, if it’s for sparring without historical reference, then consider additional features that protect your hands or larger quillons for catching the opponent’s blade, and so on. A sparring blade should also be more durable to avoid damage. A good option would be tempered high carbon steel as it is strong while retaining a flexible spine to prevent the dagger from breaking upon impact.

4 of the Best Parrying Daggers

These hand weapons are great for sports, collections, and sparring. Whether part of cosplay, larp or re-enactment here are four blades which will fit the various needs, budget, or collection.

The Diavolo Main Gauche is a wonderful parrying blade which can be used for defense and offense, but works best when combined with a single-handed such as a rapier. It is large for a dagger, but has a trident effect with up-turned ends to its guard. This means that it is good for parrying blows from larger weapons and catching blades to immobilize them.

This blade comes unsharpened as standard but can be sharpened at an extra cost. However, sharpened options take longer to have the Main Gauche delivered. Made in India by Windlass Steelcrafts, this is considered a battle ready blade. Overall, it’s a beautiful devil horned dagger which comes with a thick black leather scabbard.

For those with a higher budget and a love of pirates, the best parrying dagger has to be the Jolly Roger. This shorter blade features a tapered stabbing point made of  medium carbon alloy steel providing some toughness. Its cutlass style guard and pommel is cleverly fashioned into a skull and bones effect.

The overall weapon is 18 and 3/8 inches long with a blade of exactly 12 inches in length. Produced by Baltimore Knife & , these American made smallswords have threaded and welded pommels, 4 and a half inches of grip, and are perfect for all pirate lovers.

While beautifully crafted, anyone wishing to use this as a parrying dagger should know that it lacks a devil horn/trident effect with its guard. While it cannot ensnare a blade, its strong edge and hand guard, means it can block attacks while also being an effective offensive weapon. It comes unsharpened as standard.

Anyone looking for a good large parrying dagger under a hundred dollars should not have to look further than the Saxon Parrying Dagger. Based on originals from 16th century Saxony in Germany rather than Anglo-Saxons, this is a tough, durable and simple weapon. It’s good for the stage and also of a high enough quality to be used for sport, combat and sparring.

As expected, this is a shorter blade – 12 and a quarter inches with an overall weapon length of 18 and a half inches. At its thickest, the Saxon is 5.6 mm and 3.1 mm at its thinnest. Made by GDFB in India, this budget blade is made from 1070 to 1080 high carbon steel and has a peened pommel.

The Saxon off-hand dagger comes blunt as standard with no option from the seller to be sharpened. However, its uniqueness comes from its guard loop. This is not for catching blade tips, but rather the side-ring is there so it can be worn as a sidearm off the belt. In addition, it has a blackened wooden grip, a stitched sheath, and a hanging belt loop.

Designed as the perfect companion dagger to the German Rapier, this German Parrying Dagger is a beautifully designed piece for those with a higher budget in the mid-hundreds. It also makes a great piece for those who have a taste for collecting excellent pieces instead of using them. This dagger comes with a side ring which boasts an acanthus leaf design, a diamond cross section, narrow fuller, and a high carbon steel blade.

One of the beautiful features of this Arms and Armor classic is its guard. Known as an s-shape guard, one arm goes down to protect the hand while the other snakes upwards to ensnare blades once parried. The downside here is that if you wish to catch a blade with the guard arm, you have to let it inside your left-hand first rather than catching it with the blade between the and your body.

This is the  shortest overall weapon on our list at 17 and 3/4 inches with a standard blade length of 12 and a half inches. It comes sharp as standard, so be careful when swinging it around. The pommel has been peened, it has a half inch point of balance, and is made from 6150 high carbon steel meaning a durable blade which might be weak under bending tension.

The History of Parrying Daggers

Parrying daggers evolved from normal daggers used in the Middle Ages. The difference between a regular dagger and a parrying dagger is that the former had a small cross-guard separating the grip from the blade. The daggers were often used to stab an opponent in a tight fight or to kill a knight via a vulnerable joint in the armor such as the groin or underarm.

Over the 16th century, the dagger’s role in combat, in conjunction with a single-handed sword grew, and with this the need for a larger cross-guard or quillon grew too. They were first known as left-handed daggers, then as parrying daggers. Rather than a style or shape, they we’re named after their function. Some also call them a sidesword.

What sets them apart from other daggers is a longer blade – typically around 12 inches in length and a more developed, functional cross-guard. Some daggers have straight quillons while others droop down on one side to protect the carrying hand and others point up to ensnare swords. You also have mixtures such as the s-shape quillons which both protect the hand and help catch swords.

Designs changed over time. In the early to mid 16th century, parrying daggers were synonymous to the left hand dagger. During this time, some smiths would add holes to the central fuller to make the blades lighter while others created wavy blade effects.

However, in the early 17th century, the simpler versions disappeared to give way to the main-gauche which was very popular in Spain and italy. Later, the relatively rare triple dagger and swordbreaker with trident style quillons appeared around the 1600s.

How does a Parrying Dagger Work?

A parrying dagger is used in conjunction with a single-handed . The function of the dagger is usually defensive in that it seeks to break the -blade attack and move the blade out of the way. This opens up the opponent to your ’s attack, making them a great part of sword fighting.

Compared to a and shield combination, the dagger plays a mostly defensive role like the shield – yes, a shield can also cause damage. This frees the of its defensive duties.

Yet, if the does have to be used defensively, then the dagger can be used as an offensive – just with a shorter reach. It means dual wielders always have an offensive and defensive weapon.

Therefore, this left-hand dagger is not a weapon for newbies as you would need to be comfortable and skilled with the one-handed ; especially blades like rapiers. It would also be recommended for users to understand how to use a shield and buckler prior to taking up a second, smaller blade. It might also be worth trying a dagger-buckler combination as well.

Parrying daggers are a perfect complement to single-handed swords. They are lightweight with extended cross-guards that have quillons designed to help parry, deflect, and ensnare swords, thus freeing your own blade to attack. They are perfect for historical collectors, pirate cosplayers, and 16th century reenactors. 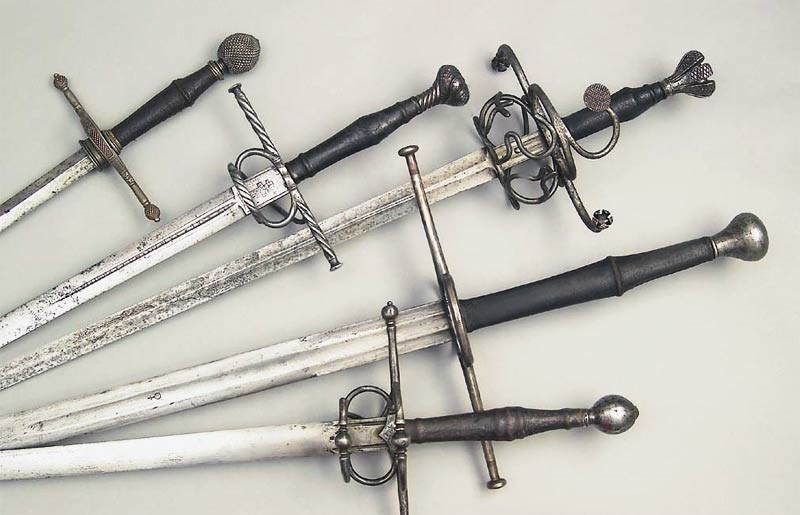