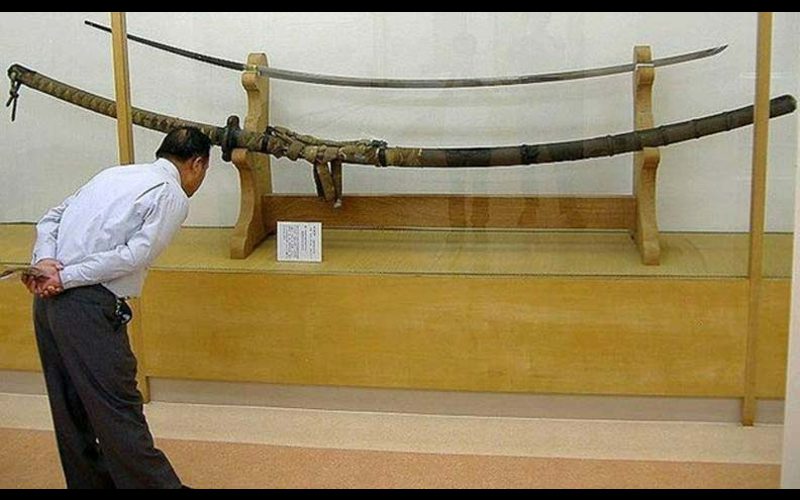 Throughout Japan’s history, the has evolved to suit the fighting styles of each period. Sometimes called nodachi, the odachi was the extra-long the samurai used during the Nanbokucho period, from 1336 to 1392. The warriors wielded it differently, and it later inspired other types of samurai swords.

Let’s explore the history and use of the odachi and where you can get it online.

Characteristics of the Japanese Odachi

Like other traditionally-made Japanese swords, the odachi was crafted from tamahagane, high carbon steel produced from the clay smelters in Japan. Japanese blades feature a soft steel core called shingane and a hard outer steel jacket called kawagane. The former functions as a shock absorber, preventing the from breaking under hard blows, while the latter forms the blade surface.

Many non-traditional swordsmiths craft odachi replicas with high carbon steel blades, but they are not of the tamahagane steel. Other reproductions also feature damascus steel with a distinctive watery pattern which is not an aesthetic feature of Japanese swords.

Japanese swords are slightly curved and single-edged, but some odachi were only sharpened near the tip of the blade, leaving the half near the handle rounded like a clamshell. Like all traditionally-made Japanese blades, the odachi features a hamon, a visible pattern along the edge, which indicates that the swordsmith hardened the edge more than the rest of the .

However, most of these enormously long examples in temples and shrines were only designed as votive offerings and never used in battle. Modern reproductions usually weigh around 3 to 4 pounds. Odachi swords were still shorter than the usual samurai spear or yari, which was about 4 meters long.

The odachi has a shorter hilt in relation to its blade length, making it difficult to handle. Still, it has the traditional guard called tsuba and scabbard or saya of a Japanese . The odachi had extremely long blades, so the samurai carried them at their backs, slung by cords around the shoulder.

In some depictions, the samurai held the shorter versions of odachi in their left hand. Shorter versions of the may also appear at a samurai’s belt, worn like a tachi with the edge facing down, though that would have made drawing the weapon more difficult.

The Japanese odachi is one of the most popular weapons for tameshigiri test cutting practice, cosplay, and LARP. We rounded up the best odachi swords to help you find the weapon that suits your needs:

If you’re looking for an aesthetically pleasing , this odachi features a stunning blade in black and red colors. For a budget of less than $400, it already includes premium brass fittings, a leather-wrapped hilt, and a wooden scabbard, so you don’t have to splurge on mountings. For cosplay and collection, you may opt for an unsharpened blade for safety.

This odachi features a full-tang blade of 1060 carbon steel, making it suitable for cutting soft or medium targets. However, it is not the best quality of metal you can get for a Japanese . Also, it lacks the traditional aesthetic features of a Japanese blade, such as the grain pattern and the hamon or temperline pattern sought-after by aficionados.

If you’re looking for a battle-ready for tameshigiri, this odachi is perfect for you. It has a hand forged and clay tempered blade of 1095 high carbon steel, one of the best quality you can have. Its razor-sharp blades can also withstand extensive test cutting on tatami mats, bamboo, and tree branches, making it ideal for martial arts practitioners who want to demonstrate their skills.

For a budget of around $700, you can also have a customized , from handle wrapping to scabbard and engraving on the blade. However, it only has an overall length of 134 centimeters and a blade length of 89 centimeters which is relatively short for an odachi .

If you want to start your collection without breaking the bank, this nodachi is a good choice. It features a 1060 carbon steel blade and a very sharp edge for cutting medium targets. For a budget of less than $355, you can have a nodachi with a relatively long blade, about 120 centimeters.

However, it does not allow customization on mountings. It already comes with brass metal fittings like the habaki collar, skull design tsuba, and a white lacquered saya. It also features traditional samurai fittings like the fuchi, kashira, and menuki decorations on hilt.

Channel your inner samurai warrior with this nodachi foam , ideal for costume props, cosplay, and LARP. Constructed from high-quality foam with a fiberglass core, it can withstand light sparring. It is also hand-painted to resemble a steel and complement your samurai armor.

This nodachi features a 105-centimeter-long blade, but lacks the distinctive curve of Japanese blades. Like all latex-coated weapons, it needs maintenance, like using silicone spray to prevent it from drying out.

Facts About the Odachi

The names odachi and nodachi translate as large tachi and field , respectively. The latter term was introduced during the 14th century when the samurai used them in battles in the open, swinging them freely.

Here are the things you need to know about the Japanese odachi:

Foot soldiers used the odachi against the cavalry.

The unwieldy-looking swords are characteristics of the Nanbokucho period, when the samurai mostly fought on foot rather than on horseback. It delivered fatal blows in single combat and was efficient for bringing down enemies’ horses.

Some samurai warriors also used the odachi while on horseback.

Sword fighting from a horse was never easy, especially since the length of the odachi made it top-heavy. Some stabilized the long weapon by tying a cord around the warrior’s arm at the elbow, making the forearm an extension of the ’s hilt. Warrior Saji Magorō used the weapon while on horseback.

The samurai carried the odachi on their back and called seoidachi.

Longer than the normal-sized swords worn at the waist, the odachi was carried on the samurai’s back, hence the name seoidachi, meaning back-carried tachi. However, such a long blade would have been difficult to draw from the scabbard by a samurai alone. So, a retainer traditionally carried it for him and held the scabbard when the warrior needed to use the weapon.

The nodachi swords demonstrated the prowess of the warriors who used them.

At the battle of Anegawa in 1570, samurai Makara Jūrōzaemon used the odachi to cut off the limbs of his enemies. In some accounts, he wielded it only with one hand, though the actual length of the weapon varies in different sources. His son Naomoto who fought with him, used a shorter odachi, about 130 centimeters long.

The late 14th-century Twelve Animals’ War Scroll also depicts the animals of the Chinese zodiac fighting a battle and portrays the characters armed with samurai weapons, including the odachi.

The Japanese pirates or wokou also utilized the odachi swords.

Between the 13th and 16th centuries, the Japanese pirates consisting of the ronin or masterless samurai and Chinese sailors, plundered the Chinese and the Korean coasts. Most of them were under various Japanese feudal leaders, and the wokou used the odachi swords. In response, the Ming army also resorted to their long sabers changdao to fight them.

Some collectors consider the odachi as a great .

Japanese blades are classified according to blade length, in which one shaku is equivalent to 30.3 centimeters. Swords over 2 shaku are considered long swords, usually tachi and katana. The distinction between a katana and an odachi would seem to be a blade length of over 3 shaku or 90.9 centimeters.

In Japan, blades that are longer than this are often casually referred to as long swords rather than being identified as a different type. In the West, collectors often refer to swords with extremely long blades as great swords. On the other hand, the tanto dagger has a blade length of less than 1 shaku, while the wakizashi or short ranges from 1 to 2 shaku.

The Gempei seisui-ki, also Record of the Rise and Fall of the Minamoto and Taira, mentions an odachi of 3 shaku 6 sun or 109.1 centimeters. In the Taiheiki or the Chronicle of the Great Pacification, the measured 5 shaku 3 sun or 160.6 centimeters.

During the Onin War period, an account mentions an odachi of 7 shaku 3 sun or 221.2 centimeters. When the use of odachi was declining during the Sengoku period, it measured 5 shaku 8 sun or 175.7 centimeters.

The Japanese nagamaki developed from the odachi.

Characterized by its long hilt which was often as long as its blade, the nagamaki evolved from the odachi swords. To make odachi easier to wield, the warriors wrapped the lower portion of the blade, which was often left blunt-edged, extending the grip. These swords were called nakamaki nodachi, which translates as nodachi wrapped around its middle. Later, the hilt itself was made longer, resulting in the nagamaki sword.

Many nodachi swords were later shortened into a katana.

During the Momoyama period, from 1574 to 1600, many nodachi blades were reshaped into a samurai katana . The katana generally has a blade length of over 60 centimeters, and the warriors carried it on the waist, with the edge facing up. During the time, military commander Totoyomi Hideyoshi also confiscated swords from all non-samurai.

Odachi swords served as a proof of a swordsmith’s skills.

In 1447, swordsmith Norimitsu of Osafune crafted an extremely long odachi measuring 377 centimeters long, which remains the longest in Japan. Widely called today as Norimitsu Odachi, the weapon weighs more than 30 pounds. It was not used as a weapon for combat but as a ceremonial and offering to shrines.

In the hands of a samurai warrior, the odachi was a devastating weapon on the battlefield. However, not many odachi retained their original form because many were shortened to make more practical samurai swords like naginata and katana. These frightening-looking weapons have symbolic significance in shrines and are sought-after by aficionados. 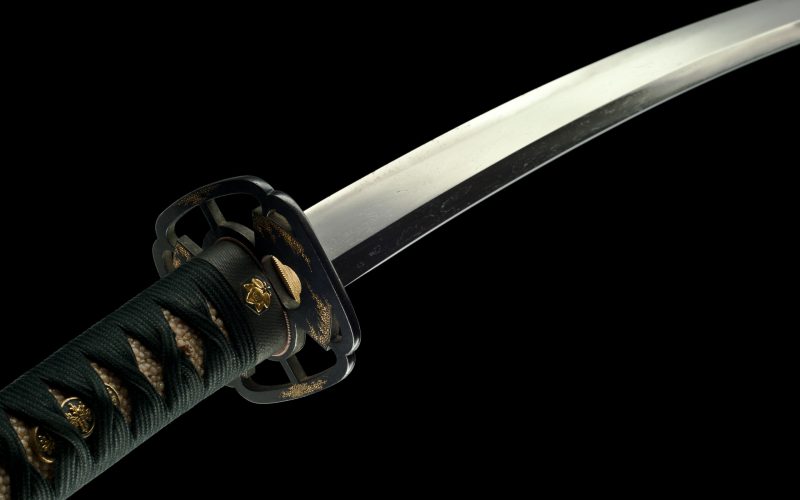 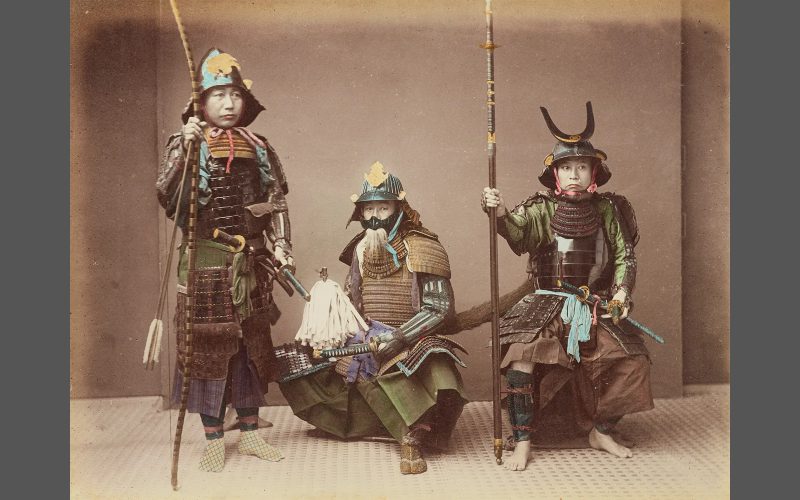 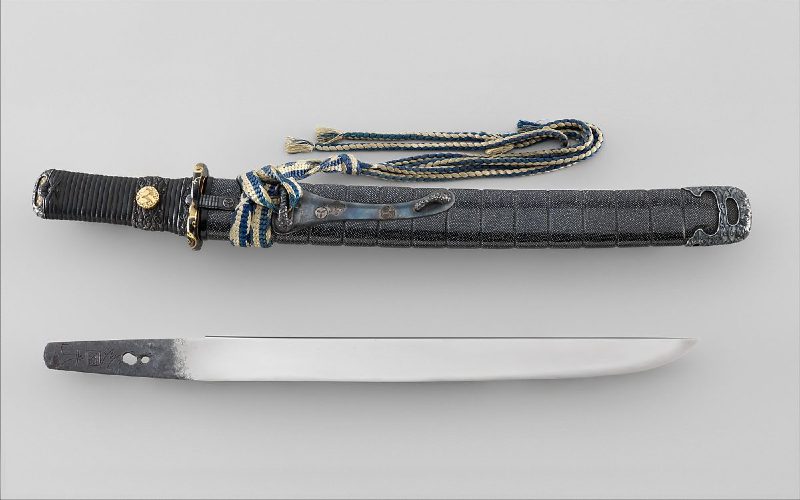 Tanto: A Guide to the Japanese Dagger

A traditional Japanese dagger, the tanto usually had all the fittings of a samurai sword. It served as a ceremonial 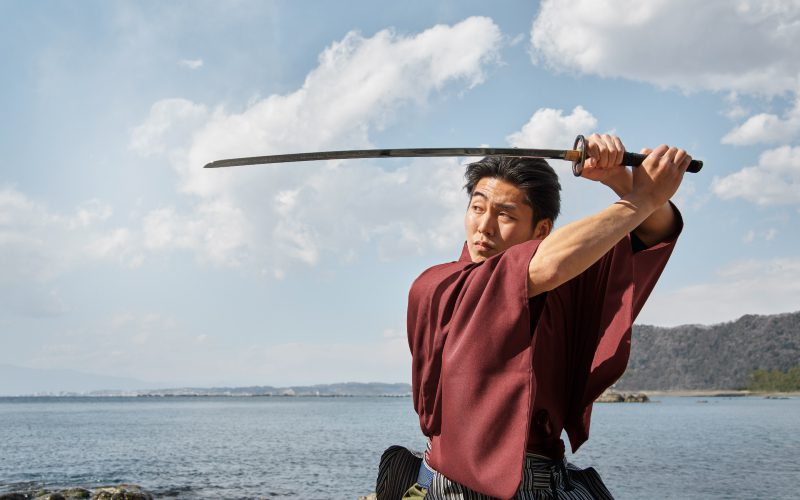 Katana: A Guide to the Most Popular Japanese Sword

The curved, single-edged katana is the weapon most associated with the samurai warriors of feudal Japan. However, the samurai sword