Different Types of Ninja Swords and Where to Buy Them

Whether on a mission of espionage or open warfare, the ninja clans of feudal Japan were renowned for their unconventional use of the ninjato or ninja and other exotic weapons. Their fighting methods were the exact opposite of the ideals of the samurai, which made them elusive and unpredictable.

In this article, let’s find out how ninjas utilized their swords and other weapons and where you can find them.

There are several misconceptions about the appearance of the ninja . However, any that belonged to a ninja can be called a ninjato. The ninja warriors relied on straight blades, similar to a chokuto , and rarely on curved ones. Also, the ninjato has a much longer tsuka or handle and a shorter blade than the katana .

Compared to the samurai used for slashing, the ninjato served as a stabbing weapon. In sword fighting, the ninjas were less orthodox than their samurai rivals. For instance, a warrior could use the saya or scabbard and the ninjato together, with one hand wielding the and the other swinging the scabbard to disorient the enemy.

While the samurai valued the quality of their blades, the ninja relied on the functionality of their swords. As a multi-functional tool, the ninjato had a strong tsuba or sword guard, which provided a step if the ninja leaned the sword against the wall. Thus, it was rarely adorned or engraved compared to samurai sword guards.

Whether you want to channel your inner ninja or looking for a sword to add to your collection, here are some of the best ninjato for you:

Black ninja swords are a must-have in any collection! For a budget less than $550, you’ll already have a set of two ninjato that you can use for both cutting practice and display. The black blades were crafted from 1060 carbon steel, making them more resistant to rust compared to higher carbon blades.

However, the blade length is around 70 centimeters long, which is quite longer than a typical ninja . Also, the two swords fit together only in one black hardwood saya. Still, you could personalize the engraving on the blades, from the smith’s name to any characters in Japanese kanji and custom symbols.

If you’re looking for a battle-ready , this ninjato is a perfect choice. Crafted from 1566 carbon steel, the blade has qualities similar to 1060 carbon steel, but it consists of manganese, which creates a hard, razor-sharp edge. Compared to 1095 high carbon steel, it is more resistant to corrosion.

For a budget less than $500, you’ll have a functional ninjato for test cutting and martial arts. Its blade length measures around 58 centimeters long, and it comes in a black scabbard. However, you have no options for personalization when it comes to the color and material of the fittings.

Are you looking for a steel for reenactment fighting, stage battles, and cosplay? This ninja has a full-tang blade and a blunt edge around 68 centimeters long. For a budget less than $200, it comes with an iron tsuba or guard and a matching scabbard. Even if it is not customizable, the is still a good choice for display.

While the samurai relied heavily on their bladed swords, the ninja warriors were very creative and used exotic weapons in many unconventional ways. The ninjato was ideal for close-range fighting, but a long staff was more practical for attacking enemies at a distance. Also, the ninja used shuriken for distant targets and utilized chained weapons, fire, and explosives.

The ninjas used the sticks and staffs as a striking weapon. There were even canes with concealed weapons called the shinobi-zue or shikomizue, which had the appearance of an ordinary walking stick. Most of them had hidden blades, varying in length from long to short and tanto dagger-like blades. The ninjas utilized some of them for shooting darts, while other canes had fixed blades and functioned as a spear.

The sickle, called kama or gama, is a popular agricultural tool for harvesting rice and other staple grains, but the ninjas utilized them as a deadly weapon. The kusarigama often comes with a chain and an iron weight at the end. It had several uses, from strangling the enemy to tripping warhorses. Some chained weapons functioned as climbing aids and sometimes served as a whip.

In pop culture, from anime to films, the ninjas are often portrayed with their shuriken or throwing stars. However, these weapons vary in size and can be straight-bladed or star-shaped. Most of the time, the ninja carried them in groups of nine, concealed in a jacket or leggings.

The ninjas also used fist-load weapons for defensive purposes. Some of them were made of wood, others from hand forged metal. With careful placement in the palm, a shuriken also served as a fist load weapon for close-range fighting.

If you’re looking for ninja weapons ideal for LARP or live-action role-playing games, as well as realistic-looking props for cosplay, here are your best choices:

Also called kusarigama, this ninja weapon will complete your look! It features a blunt blade, making it safe for stage battles and reenactment fighting. For a budget less than $30, you’ll have a sickle-like prop that can be converted into an edgier ranged weapon, featuring a 24-inch chain and iron weight at the end. It has a beautiful black blade, though the finish is quite prone to scratches.

Crafted from high-quality stainless steel, this throwing knife set is resistant to rust, and is perfect for collection. For a budget less than $15, it comes with six throwing knives and a durable nylon storage pouch. Each knife has a razor-sharp stainless steel blade, around 8 centimeters long, making it battle-ready.

Are you looking for a ninja weapon safe for cosplay and LARP? This shuriken is a foam weapon, but it features realistic iron blade textures. For a budget less than $10, you’ll have a realistic-looking prop that fits your needs! Since it is a latex-coated weapon, it would require maintenance and should only be kept in a cool, dry place.

Historical Facts About Ninjas and Their Weapons

In films, anime, and books, the ninjas often serve the role of a silent and deadly assassin. They are the spies and arsonists willing to die for their mission. The ninjas not only used swords in unconventional ways but also improvised weapons, used mind games, and executed incredible skills.

Here are the other things you may not know about the ninjas and their weapons:

The term ninja is a relatively modern name.

The earliest names to indicate ninja included kansai, kanchō, gokan, and yōkan, and these names vary according to the periods, places, families, and other factors. By the Asuka period from 592 to 710, the term shinobi—an alternative reading of the character nin—became popular.

There were other alternative names depending on the ninja’s specific role, but the term ninja became the most popular since it is easier for Western speakers. It was first quoted in the Buyō Benryaku in 1684, describing the ninja as people who infiltrate an enemy castle.

The ninjas were masters of craft and passed their traditions on to their descendants.

The years of training prepared a ninja for the time he could finally offer his skills and services to one in power. Ninja training usually began at the age of 5, when a child learned the principles of balance. Then, a young ninja became skilled in breathing underwater. In his teenage years, he likely mastered the basics of ninjutsu and other survival skills. When he completed his training, he would embark on his first mission.

The ninja did not always dress in black.

In pop culture, the ninjas are often portrayed in a traditional black costume. However, the ninjas also traveled in disguise to other territories, sometimes dressed up as firewood gatherers to acquire news about their enemy or as one of an enemy castle’s guards. They also served as agitators, often on a battlefield to confuse the enemy.

The ninja used not only the but also the saya for combat.

Unlike the elaborate mountings of the samurai , the ninjato often came in plain shirasaya. Also, the ninja utilized the space in the saya for storing blinding powder and other objects for combat. In some cases, the scabbard functioned as an underwater breathing tube, as well as an improvised blowgun.

The ninjas used fire and explosives to create diversions.

Many ninjas were skilled at making their explosives from natural ingredients, often to take down doors and walls and create force evacuations. In the event of capture, some even used concealed explosives to destroy their facial features—or even take their own lives. Thus, their clan’s identities would remain a secret to the enemy.

What Are Ninja Weapons Used For?

Ninja weapons are perfect for collecting and valued for their functionality. In some cases, shuriken and fist-loads serve as personal defense weapons. Unlike the Japanese sword, valued for its craftsmanship and clay tempered blades, ninja swords function more as a tool for cutting practice and solo training.

On the other hand, ninja weapons with unsharpened edges, including staffs, are utilized in martial arts like ninjutsu. Some are also perfect for live-action role-playing games, stage battles, and cosplay. Even if most LARPs are for entertainment, realistic-looking weapons can give meaningful experiences for the participants.

The ninjas were the spies and assassins of feudal Japan, and they remain a subject of fascination in modern times. They mastered the craft of stealth, improvised weapons, and executed incredible fighting techniques. Today, ninja weapons, including the ninjato , shuriken, and kusarigama remain relevant in pop culture and martial arts. 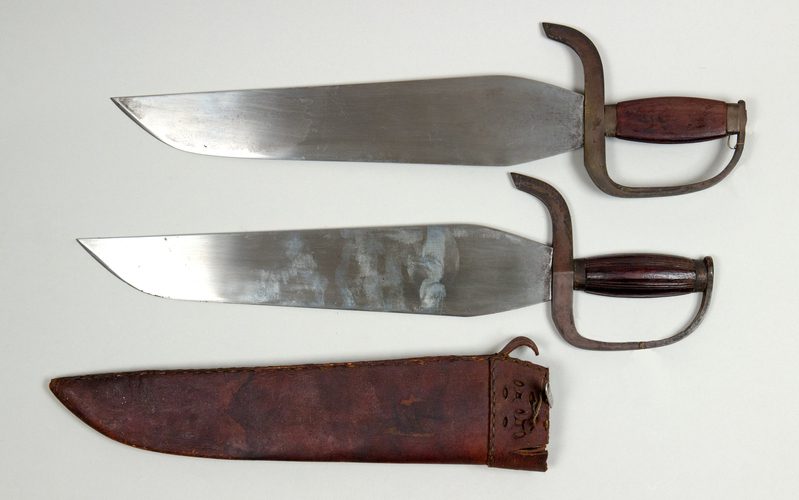 Butterfly Sword: History, Construction, and Use

The Chinese are famous for practicing kung fu and martial arts. In Southern Chinese martial arts, butterfly swords are known 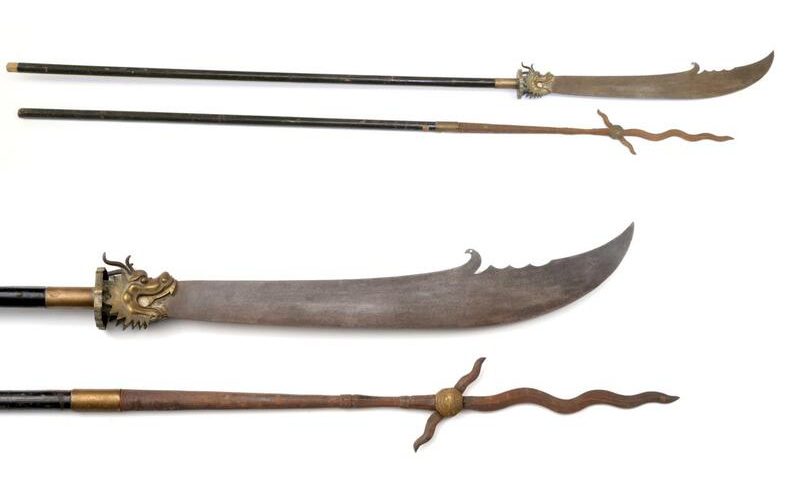 Guandao: A Guide on the Chinese Polearm

The Chinese polearm guandao is famed for its long crescent-shaped blade and sharp point. In the right hands, it could 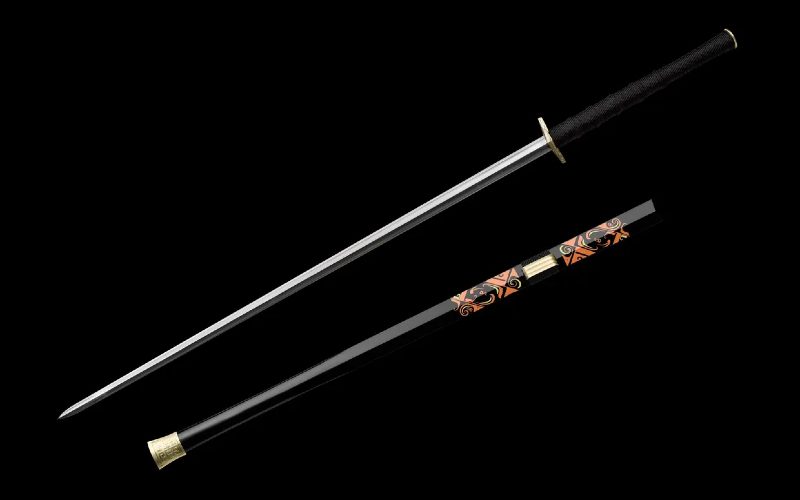