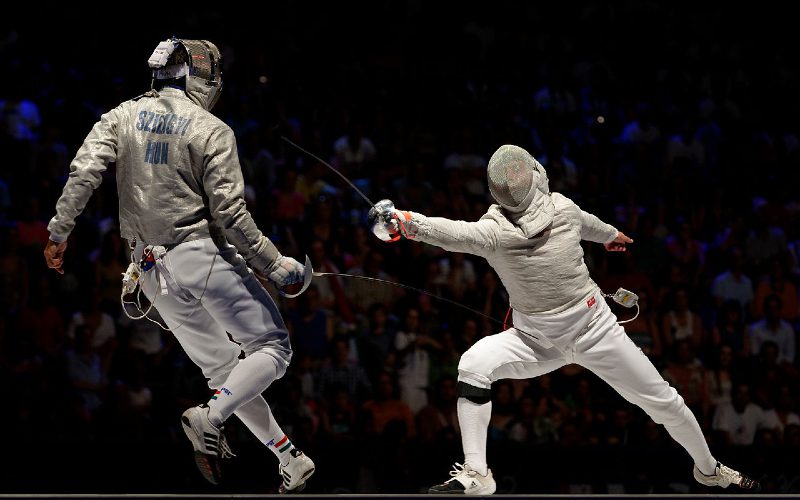 Fencing is a sport and art of swordsmanship using blunted weapons. First featured in the modern Olympic games in 1896, it remains an integral part of the event. A modern fencer uses one of the three weapons—the foil, épée, and saber.

Let’s explore the unique characteristics of fencing swords, the differences between the three disciplines, and how fencers score using their weapons.

Modern fencing involves using a : either foil, épée, or sabre. Each weapon has different designs and rules of competition.

The foil served as a training weapon for the smallsword during the 17th century. It was also the first fencing weapon used in international competitions. Flexible and lightweight, it features a small bell guard and a slender blade.

Early fencers called it foil because its tip had been flattened—or foiled—and padded to reduce the risk of injury. Since foil is a thrusting , fencers can only score points by striking the tip of the blade to the target area, which is limited to the torso. Also, a slap or graze with the weapon is not a valid hit.

In the 19th century, the épée emerged for use in practice and fencing competitions. The modern épée derives from the épée de combat, the standard dueling of the time. According to legend, a French student developed the fencing weapon as the foil was too light and unrealistic for sword fighting.

The heaviest of all the three weapons, the épée is similar in design to the foil but slightly larger. It features a curved guard and a thick, triangular blade. In épée fencing, the target area is the entire body, from the top of the mask to the tip of the toes. It is also a thrusting weapon, so fencers only use the tip of the blade to score points.

In the 19th century, the sabre developed in Italy as a light fencing weapon. The sabre is a cutting and slashing weapon, but fencing blades are lighter and more flexible than real blades. The fencing features a crescent-shaped guard and usually a V-shaped blade.

In sabre fencing, fencers score points by a combination of thrusting and slashing, using the tip or edges of the blade. While its rules are similar to foil fencing, its target area is the upper half of the body, including the neck and head.

The International Fencing Federation (FIE) sets standards for fencing weapons, from quality and construction to size and weight.

Here are the characteristics of modern fencing swords:

In international fencing competitions, maraging blades are required for foil and épée, as they bend well on impact. They generally last four times longer than carbon steel blades, reducing the chance of injury.

Regular steel blades could easily break with a sharp angle, but maraging blades could bend to extreme levels before fracturing. However, flexibility may vary depending on the weapon. A blade that is too flexible and whip-like is generally not recommended as it often affects the point accuracy.

Every blade has a strong area called forte, the part closest to the hand guard. The middle area of the blade is the medium, while the foible is the weakest part near the tip. Generally, the fencing blade is tapered to a blunted tip, usually with a button or stop.

Blade cross sections vary for each weapon. The foil has a slender, quadrangular blade, while the épée has a thick triangular blade. On the other hand, the sabre features a V-, T- or Y-shaped blade.

According to FIE rules, the total weight of the foil must be less than 500g to allow faster and more complex movements. On the other hand, the épée is naturally a heavier weapon and therefore, must weigh less than 770g. Slightly shorter than the two weapons, the sabre weighs less than 500g.

Fencing hand guards are made of lightweight metal, usually aluminum. They are plain, uniformly polished, and smooth as rough edges could easily hinder the opponent’s blade. Hand guards protect the hands of the fencers particularly in épée and sabre fencing.

The foil has a small bell guard, while the epee has a bowl-shaped guard slightly larger than the other. On the other hand, the sabre has a crescent-shaped guard with a knuckle bow.

Fencing swords usually have wooden handles wrapped with leather or cord. Handle shapes may vary, from the plain French handle to a pistol-grip handle made of aluminum or plastic. The sabre has a grip similar to the French handle, though its curves are designed to fit into the palm while holding the weapon. It sometimes features a plastic handle covered with rubber.

When holding the , the thumb and index fingers control the tip of the blade. The pistol-grip handle gives more power to offensive and defensive actions, but it tends to put tension on the hand and does not allow much point control as the French handle does.

In the United States, fencing masters recommend that a beginner opt for a French handle for foil and épée. Still, other fencers favor the pistol grip in épée, as it helps resist the opponent’s attack on the blade.

Facts About the Fencing Swords

In modern times, fencing generally refers to the European school of swordsmanship and Olympic fencing. The foil, épée, and sabre also have similarities in techniques.

Here are the things you need to know about fencing swords:

The French school focused on fingerplay, in which the forefinger and thumb control the blade while the rest serve as aids. Hence, the French preferred the straight handle for foil and epee. On the other hand, the Italian school emphasized forceful movements, utilizing the crosspiece on the bell guard to allow the gripping of the ricasso. The Spanish schools also inspired pistol-grip handles, allowing the fencer to take advantage of fingerplay and strength.

In fencing, the goal is to hit without being hit by the opponent’s blade.

Fencers score points by hitting target areas on their opponent’s body. In every fencing match, fencers fight on a rectangular mat called a piste, and the fencer with the most points wins. The International Fencing Federation (FIE) governs Olympic fencing, which evolved from guidelines created in the 17th century.

A slight bend on the blade is needed to register a valid hit on the target.

If the blade is sharp, it would have gone in after hitting the target. In fencing, the hit must cause the blade to bend slightly, indicating penetration. Technically, a valid hit is a correctly made hit on the target. If the hit comes from the cutting edges of the blade instead of the tip, it is considered flat. Also, hits that land on non-target areas are off-target.

In foil and sabre fencing, the right of way system determines who has priority.

Generally, an attacker has the right of way, so the defender should neutralize the attack before making a counterattack or riposte. However, there is no right-of-way system on epee fencing. So, both fencers can score for simultaneous hits.

Fencing gear must be well constructed and provide sufficient protection.

For Olympic fencing, masks and neck bibs must pass the requirements of the International Fencing Federation or FIE. A safe fencing mask must pass a 12kg punch test, while the neck bib, often made of Kevlar, should be able to withstand 1600 Newtons. Fencers wear a jacket and a plastron, a padded garment with one sleeve, but a women’s jacket consists of an extra chest protector.

To register scores accurately, fencers wear a lamé, an electrically conductive garment worn on the target areas, and a body cord that connects to the fencing weapon. The hit is valid if it lands on the lamé, but if it touches the non-conductive part, it is considered off-target and not counted.

Once a fencer has hit a valid target, the opponent has 300 milliseconds to hit before the score counts. If both fencers hit their targets, the referee awards the point to whoever has the right of way rather than who lands first.

Footwork is the foundation of the skillful use of fencing weapons.

Fencers spend much time on footwork preparation before focusing on the blade. Before a match, they are in their en garde position, where both legs are bent and ready to fence. The way to deliver an attack is the lunge, in which the front foot glides forward with the power coming from the back leg. So, quick footwork is essential for a fencer in both the attack and the defense.

In Europe, fencing developed as training for warfare and duels.

Dueling was the method of resolving the conflict, where fighters often fought to the death. By the 15th century, dueling had evolved into a sport in which a fencer scored points when his made contact with his opponent’s body. Early fencers fought with rapiers and smallswords, but the sport of fencing became safer with the introduction of fencing weapons like the foil, saber, and épée.

Fencing has its roots in antiquity, but it evolved into the modern sport we know today. In the Olympic Games, fencers compete with one of the three weapons—the foil, epee, and sabre, each with different techniques and rules of competition. It is one of the safest sports in the world you could practice throughout a lifetime. 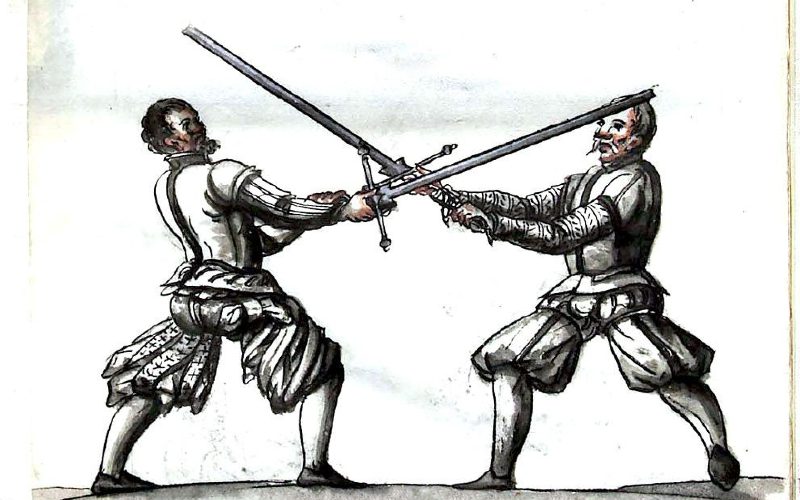 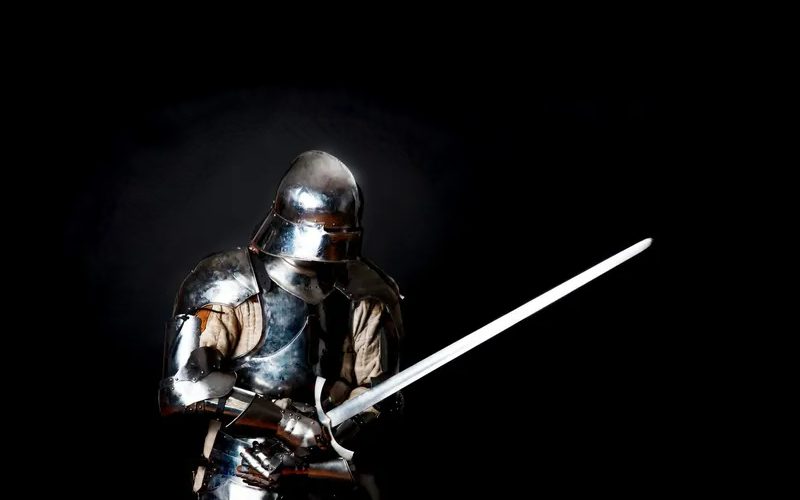 A Guide to the Medieval Longsword

During the Middle Ages, the medieval knights wielded their longswords against heavily armored opponents. Most recognized for its cruciform hilt, 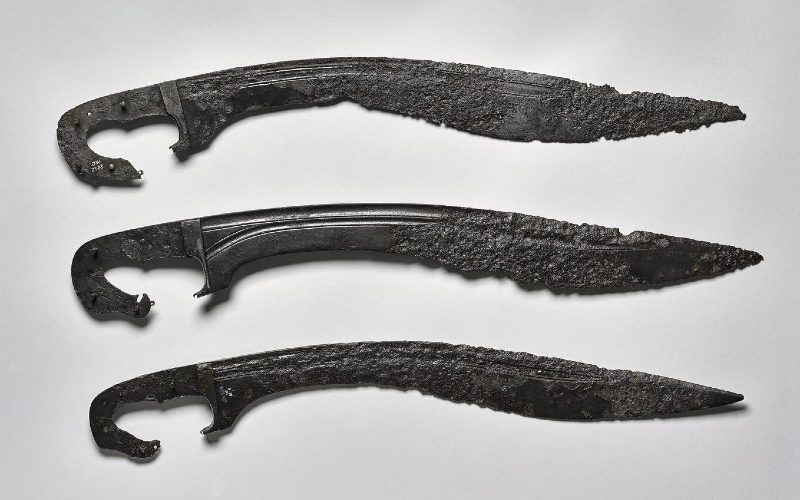 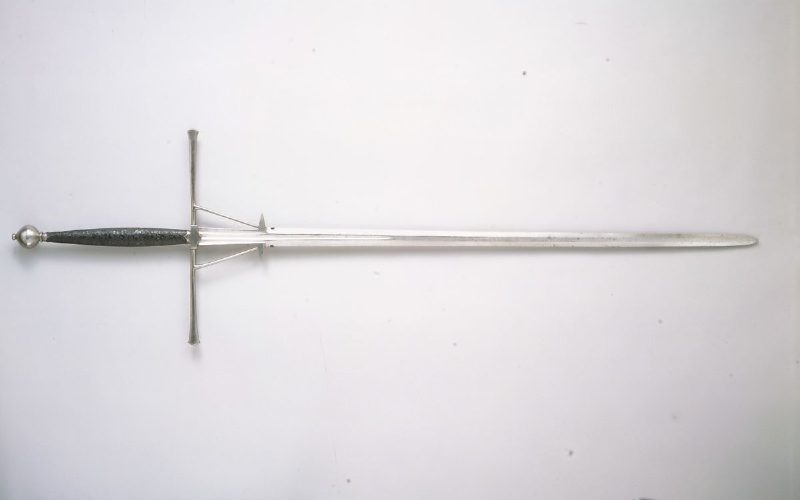 Two-handed swords were long favorite weapons in many parts of Europe. Recognized for its massive long blade with parrying hooks,