Daisho: A Pair of Swords Worn by The Samurai 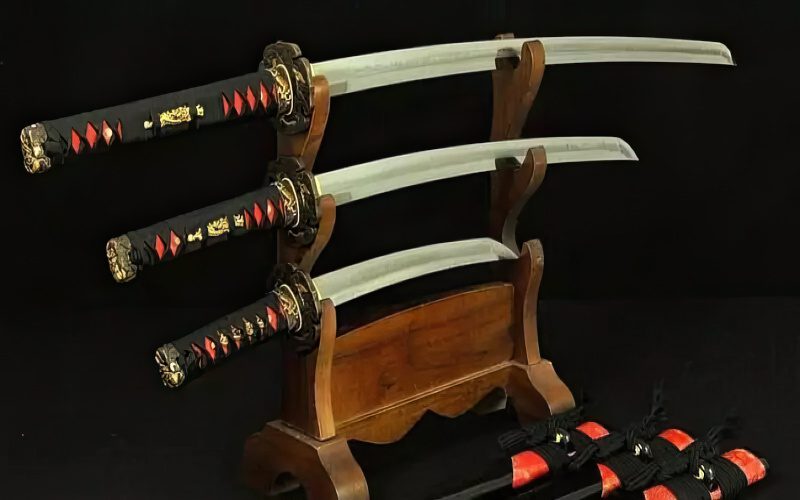 The samurai warriors had to be ready for combat at all times, so it became customary to wear a sword pair called daisho. It consisted of a long sword and short sword, known as the katana and the wakizashi respectively. Ideally, these swords had similar mountings, suited for formal or ceremonial use or designed for practical use.

Let’s explore the history and characteristics of a daisho and why it became the status symbol of the samurai class.

Characteristics of the Daisho

The daisho is a pair of long and short swords, often furnished with matching mounts and fittings. Ideally, the katana and the wakizashi were made by the same swordsmith.

Here are the distinguishing characteristics of a daisho:

Swordsmiths in Japan craft sword blades from tamahagane, a type of steel produced in a Japanese-style smelter called tatara. The two blades of a daisho were often produced by the same swordsmith to be worn together. Also, many of the blades used in early daisho were old tachi which had been converted into a katana.

Japanese swords have single-edged, curved blades and feature a genuine hamon—temper line pattern along the cutting edge. The blade also has the artistic features of the jigane and jihada (steel surface texture and pattern).

A daisho comes in a koshirae—an elaborate mounting that consists of a braided hilt wrapping, sword guard, lacquered scabbard, and other metal components. It would have the same basic design or theme for both swords, though not necessarily identical.

The tsuka is the handle part of a samurai sword. The wooden handle is usually covered with sharkskin or ray skin and braided hilt wrapping. It also consists of other metal decorations, such as the menuki ornaments on each side of the hilt, fuchi, and kashira.

In a daisho, the fittings at the base of the hilt (fuchi) and on top of the hilt (kashira) also have the same theme. The ones used by the samurai were often made of shakudo (an alloy of copper and gold).

A tsuba is a sword guard that protects the hand. In a daisho, the sword guards of a katana and a wakizashi also depict similar styles and themes.

The scabbards (saya) of a daisho were often lacquered and highly artistic. Today, when a swordsmith makes new blades, he places them into a shirasaya (simple wooden scabbard). If the owner wants a daisho, he must commission another group of craftsmen after the smith has finished his work. Many old Japanese blades today are mounted in shirasaya because their daisho koshirae has deteriorated over the years.

Historical Facts About the Daisho

The term daisho literally means large and small, referring to matching long and short swords. Its etymology also becomes apparent in the Japanese terms daito and shoto, which mean long sword and short sword respectively. Here are some facts you should know about the daisho:

The daisho is a paired set of swords—a katana and a wakizashi.

The custom of wearing daisho began in the late Muromachi period when Japan was in constant war. While the katana, the long sword, was mainly used on the battlefield, the shorter wakizashi served as a supplementary weapon.

Before entering a house or a public building, the samurai traditionally left the long sword at the entrance, allowing only the short sword to accompany him. The warrior may sometimes leave the two swords at the entrance as a sign of respect.

Wearing of daisho was restricted to the Japanese samurai class.

There are several reasons why a samurai wore two swords. First of all, he had to be prepared to deal with a sudden threat at all times. Secondly, he often executed criminals under his lord’s orders. Those who were not samurai such as farmers, merchants, and craftsmen were only allowed to carry the shorter sword wakizashi. Hence, the daisho became the symbol of authority of a samurai.

The samurai used the wakizashi for ceremonial suicide and later preferred the tanto for the purpose.

The samurai often performed seppuku ritual suicide to avoid being captured in war after defeats. While the wakizashi is a short sword, the tanto is a dagger, usually less than 30 centimeters long, and generally has a straight blade. Like the wakizashi, it was carried and not left at the entrance when paying a visit.

The daisho served as a sign of military preparedness.

During hostile times, the samurai wore the daisho with their cutting edges upwards thrust through the belt. It was contrary to the wearing of the earlier tachi that needed two motions when drawing the sword. Therefore, the samurai were always armed and were able to respond to the call to battle.

The daisho had elaborate sword mountings.

The daisho became an important status symbol of the samurai who often flaunted their tastes and wealth on their luxurious sword mountings. Most of the time, both samurai swords were mounted with matching fittings, referred to together as a daisho koshirae, meaning large and small mounting, either for practical or ceremonial use.

The daisho koshirae had numerous regulations depending on the occasion.

By the Edo period, the samurai often had their official ceremonial occasions, so they were required to wear a formal daisho. The samurai at the castle in Edo wore the banzashi daisho (duty attire) which had a black lacquered scabbard, white same (ray skin), and horn fittings. The sword guard was also a polished shakudo without any decoration.

During the Tokugawa peace, swords transformed from weapons into objects of art.

Because of the lasting peace, daisho mountings became more decorative and elaborate. Several schools of sword-fitting makers emerged in Kyoto, Edo, and some provinces. Various decorative fittings allowed a samurai to personalize his daisho and showcase his style. Many designs even reflected the religion, legends, and mythology of Japan.

The Daisho in Modern Times

The katana sword is the defining blade of most Japanese martial arts today. Still, some advanced students utilize the daisho. In Fukasa-Ryu kenjutsu and iaijutsu, double-sword techniques (nito-waza) are only taught to students who acquired the master levels of the system. Practitioners use live blades in tameshigiri test cutting practice against targets like bamboo and tatami mats.

However, practitioners use an iaito (unsharpened metal sword) in scabbard practice and a bokken (wooden sword) for individual and partnered practices. As art objects and part of Japanese history, the daisho remains significant for sword collectors and historians.

Known for their courage and bravery, the samurai warriors of feudal Japan regarded the daisho as the symbol of their rank. While the katana served as the primary sword on the battlefield, the wakizashi functioned as a backup weapon. Today, this pair of swords remains popular among sword enthusiasts and collectors worldwide. 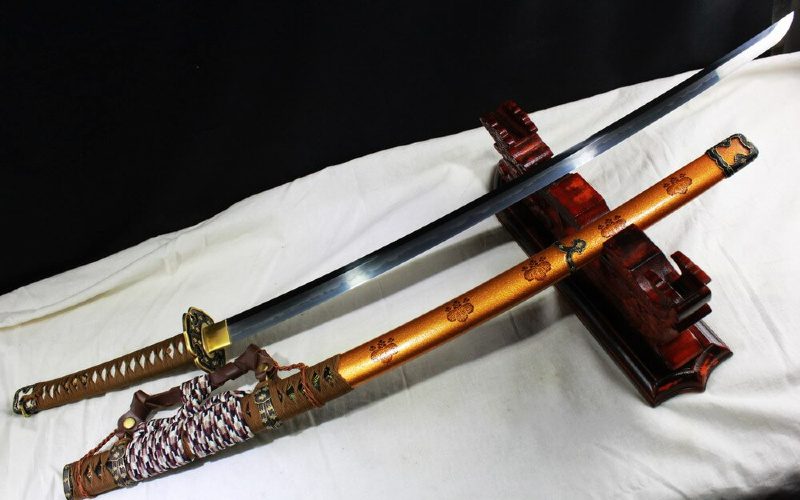 Tachi Sword: Types of Mounting, History, and Use

Designed for use in slashing, the tachi was the first type of Japanese sword with a curved blade. The early 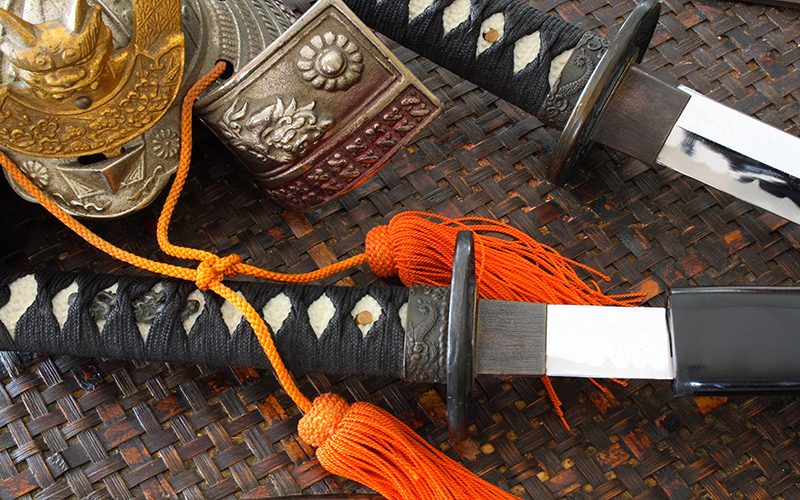 Japanese Swords 101: A Guide for Both Novices and Enthusiasts

Throughout history, the Japanese sword served as a remarkable weapon used both in duels and on the battlefield. It has 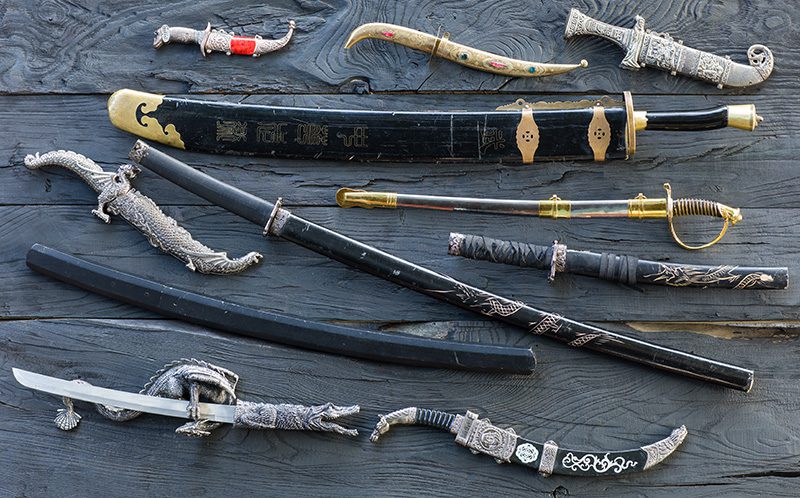 18 Asian Swords Types and Where to Buy Them

Asian warriors used different types of swords to win military battles and indicate social status. In the 16th and 17th