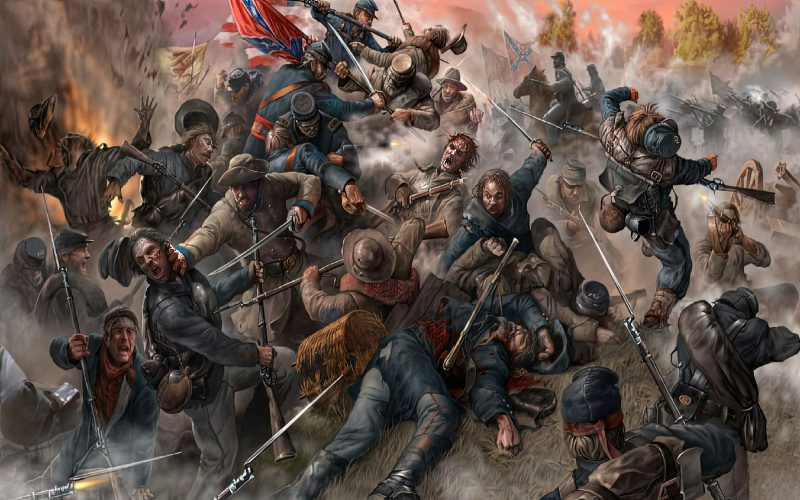 By the time the 1860s rolled around, the swords had lost a lot of the importance that they had in combat. However, during the course of the American Civil War, swords continued to play a vital part in combat, despite the fast development of rifles, which would eventually eliminate the need for them altogether.

In the following article, we will go over some of the most significant civil war swords that were used during the American Civil War. You will also learn about which swords were the most useful, as well as the ones despised by soldiers in the army. Finally, to wrap things up, we are going to find out just how frequently swords were actually used during this conflict.

Named after Egypt’s ancient Mamluk troops, the Mameluke sword takes inspiration from Egyptian weaponry. Many European armies, notably the United States and the United Kingdom, adopted some of these soldiers’ tactics and weaponry.

An officer’s Mameluke sword from around 1825 had a total length of around 37 inches (95 cm), with the blade measuring about 32 inches (83 cm). The Mameluke sword was widely utilized by both sides throughout the American Civil War.

Both the 1825 and 1875 models used steel blades, however, the 1875’s blade is engraved with beautiful motifs and designs. Popular even today, the blades often have elaborate gold engravings like floral sprays or military designs from the U.S. Marine Corps scrolled over the front. It is still being used by the USMC even to this day as a ceremonial sword.

This straight civil war sword, which took inspiration from the Roman Gladius, was designed to be carried by individual soldiers in the regular artillery or foot artillery battalions of the Union Army. It was employed by foot artillerymen up until the year 1872. It was additionally the sword that was issued to commanding officers and instrumentalists in certain regiments between the years 1832 and 1840.

The handle of the foot artillery short-sword is 6 inches (15 cm) in length. The length of the blade is typically 19 inches (48 cm), and the guard is usually 4 inches (10 cm) in diameter. This makes the overall length to be around 23 inches (60 cm)

Throughout 1832, the United States placed many orders for this particular style of sword made in AMES Massachusetts. Prior to the year 1861, the majority of artillery divisions were equipped and trained like infantry, therefore it did make sense to provide both sorts of army troops with the same type of weapon.

The origins of the saber can be traced back to the European backsword, which was a single-edged, straight sword with an early basket type of guard. It typically has a blade that is curved ever-so-slightly and has a knuckle guard that is quite larger than other swords.

Its overall length is quite long and spans around 37 to 41 inches (95 to 105 cm). This size allowed for its usage in pretty much all types of scenarios. It was used heavily until it got replaced by newer types of civil war swords.

First used by Hungarian horsemen in the 10th century, the saber reached the height of its usefulness during Napoleonic Wars and also the American Civil War, both of which took place in the 19th century.

Some people say that artillery swords shouldn’t be considered real weapons of war because artillery personnel are naturally linked to their cannons, but they aren’t any less significant. These swords played a very important role in all sorts of battles.

The Light Artillery Saber has a knuckle bow and is about 6 inches (15 cm) in length. The handle is constructed out of leather and wrapped in brass wire. The overall length of the one-edged blade is usually about 32 inches (83 cm). This sword from the American Civil War does not come with a basket guard making it look like a copy of the French 1829-style sabre.

This saber features a flat handle made of brass, a leather grip that’s also wrapped in brass wiring, and a leather scabbard that can be sometimes made out of steel. When compared to other cavalry swords, this one is much shorter and has a more acutely curved blade.

During the American Civil War, the 1840 Cavalry Saber often was referred to as the “wrist breaker” by the men who fought in the conflict. It wasn’t pleasant to use and it wasn’t helpful in combat. As you can guess, it got its name because it often broke wrists – only it wasn’t the enemy’s wrist. They stopped manufacturing this model after 1858.

The Model 1840 Cavalry Saber features a ridge around its guard, a leather grip braided in wiring, and a flat, slotted throat. These characteristics distinguish it from earlier models of the saber. The sword has an overall length of 44 inches (110 cm), with a blade measuring 35 inches long (89 cm). It comes in at around 2.5 pounds (1.2 kg).

The wrist breaker’s design was most likely inspired by the Hussar’s saber that was used in France in 1822 since it looked quite similar to that weapon. There were alternatives available instead of the 1840 Cavalry Saber that performed much better in combat, so it was quickly replaced.

This non-commissioned officer US civil war sword replaced the previous saber from 1832. It was given to all officers, but in time it spread to all types of soldiers that wanted to use it. There is a shorter version of this sword that was called the Musicians sword.

The length of this sword’s blade is around 31 inches (79 cm), which when combined with the handle, would make the overall length and size around 35-37 inches (90-95 cm). This was a fairly large sword to use and made it feel very ill-balanced. Its long, high-carbon steel blade was sheathed in leather instead of another metal material.

It was the primary weapon of standard infantry as well as the secondary weapon of infantry NCOs. Hospital stewards also used it as their primary weapon. It was used as a confederate sword after they seized several of them after taking control of state arsenals.

This officer’s saber has a length of around 35 inches (80 cm), and contrary to some of the other swords used in the American Civil War, it was good in most situations. It was often used by law enforcement because of its adaptability and usefulness.

The staff officer’s sword was created and made for Majors and higher ranks, but since swords were privately purchased and not provided by the government, anybody in a position of authority might have one.

The 1860 cutlass is a naval-grade weapon. Since it looks so much like a saber, it’s no surprise that people frequently get the two confused. Despite seeming identical, the 1860 Naval Cutlass is an entirely different weapon.

The blade of a Naval Cutlass is curved, just like that of the cavalry saber, but it’s broader and more stable than the saber’s blade. It has an overall length of around 26 inches (66 cm) is another way in which it differs from the saber by being shorter. The guard has a solid brass plate that offers further protection since it was meant to be used in close-quarter scenarios.

The goal was to maximize its utility in confined spaces. The blade was thin when sheathed and short enough to be used for both thrusting and slashing in combat. This would allow the user to easily navigate confined areas, such as below the decks of a ship, while the sword was sheathed.

The 1860 Light Cavalry Saber stands out above all other weapons types as the most clearly recognizable sword of the American Civil War. That is why it is the most well-known and popular sword for LARPers and various types of Civil War reenactments.

The design of this sword was inspired by the hefty cavalry saber of 1840, but it was shortened and lightened to improve use. This light cavalry saber had a curved steel blade that overall measured 35 inches (90 centimeters). It has a brass hilt, and there was a hand guard that ran the entirety of the handle to the end of the pommel. When it wasn’t being used in combat, it was kept in an iron scabbard.

The vast majority of mounted soldiers used this weapon. During the Civil War, cavalry charges were all too common. Mounted forces would ride head-on into a line of foot soldiers in an effort to break through, utilizing their horse’s speed and height. Since most foot troops carried muskets that required a long time to reload, these charges proved successful even when rushing straight into a line of muskets.

During the American Civil War, rifles often had a blade, called a bayonet, affixed to the end of the weapon. The bayonets employed in the Civil War were incredibly long, and some would classify them as swords for this reason alone. Sometimes even swords themselves were attached to the end of the rifle and used as a bayonet.

Usage of Swords in the American Civil War

Swordfighting was already a tried method of warfare by the time the American Civil War broke out. Despite the confidence military planners had in the ability of hardened steel to drive the opponent off the battlefield, very few actual engagements came to blows.

Even in the reports of wounded soldiers taken right after the war, there were very few men treated for a sword-inflicted wound. Also, in many of these reports, there are commanders complaining that their soldiers had little to no training when it came to sabers and they were very hesitant and unfamiliar with how to properly utilize them.

If combat suddenly moved to close quarters, the bayonet was usually the one doing the killing; swordplay on the battlefield was mostly a thing of the past at this point in history.

The biggest sword users would have been the cavalry units, which would sometimes rush into a straight line of fire of rifles after they were taking time to reload their muskets. Usually, the civil war swords were used one-handed in these battles.

While bladed weapons had their uses, they really are no match for the cutting-edge military equipment of firearms like the revolvers and rifles that were being produced at the time.

Even the outdated flintlock rifles and pistols the soldiers used meant that they could fire their weapons once per minute or so. So you can only imagine what happened when the French Minie bullet came into play, which was highly more accurate than the previous ball-style bullet.

American Civil swords are one of the most interesting pieces of weaponry that lived through the bloodiest conflict in the US. Today it is an instrument that is well respected in the US army, with many ceremonies utilizing it. If you are a sword enthusiast yourself, this is a vital piece of weaponry to own. 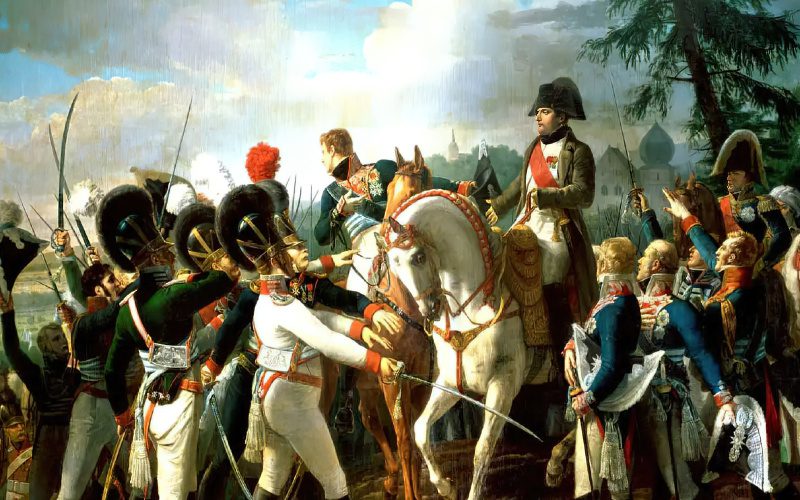 The French saber is the most iconic French sword that shaped Europe to its core with the march of Napoleon. 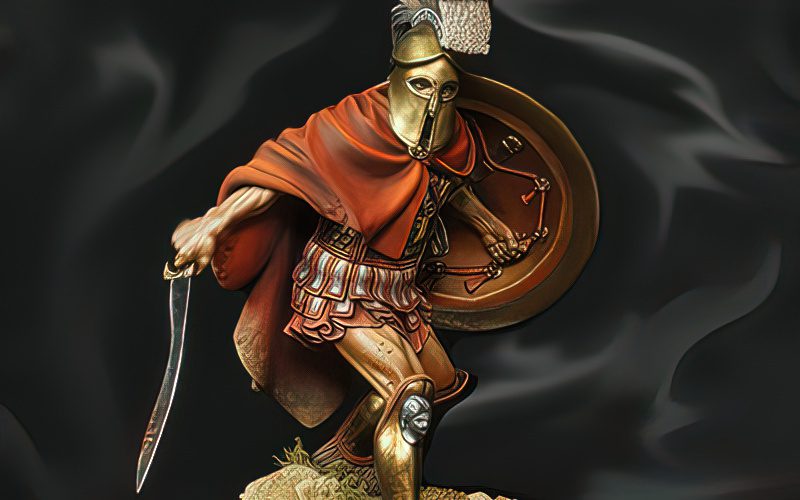 Most Popular Greek Swords and Their Historical Uses 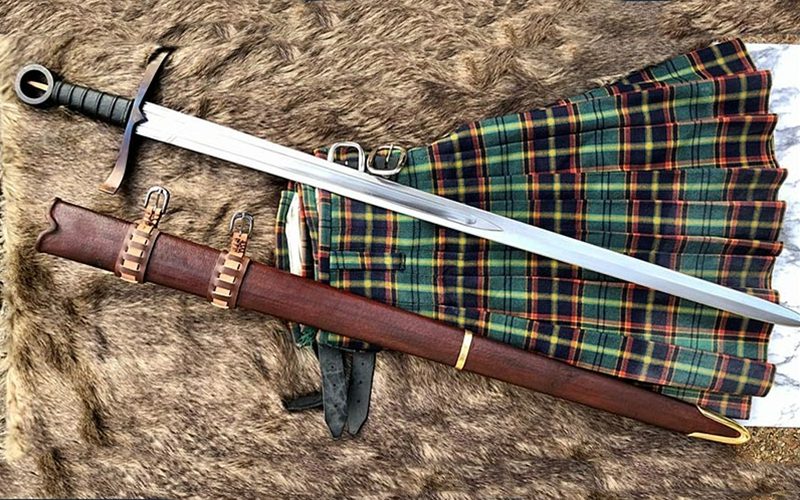 Irish Swords: Their History and Use in Warfare

Most recognized for its open ring pommel, the Irish sword served as an efficient slashing weapon against chain mail, a 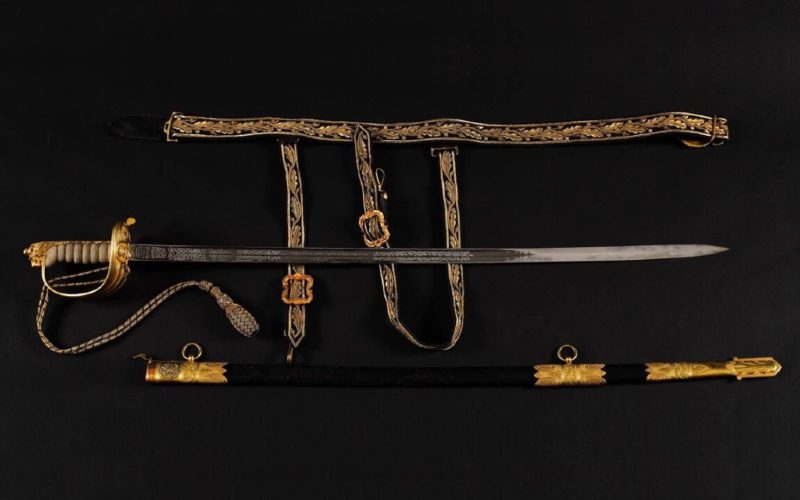 Russia is well known for its strong army, huge cannons, and bombs. But did you know that Russia has a